(funny, when you type "Boston the band" into Google Image Search, the above Negative FX jpg comes up pretty close to the top of the entries)

Though I have MORE THAN A FEELING (sorry) we've not seen the last of this dispute, the Boston Herald's Joe Dwinell reported yesterday a Superior Court judge rejected claims by Boston guitarist/founder Tom Scholz the Herald had defamed the one-time AOR radio fixture.

Scholz is suing the Herald over three 2007 Inside Track columns that he claims imply he drove fellow band member Brad Delp to commit suicide in March 2007. In May of 2010, the Herald published several articles reporting on Scholz’s lawsuit and the parties’ respective litigation positions in it. Scholz claimed that the Herald’s May 2010 articles had defamed him and caused him emotional distress.

Massachusetts Superior Court Judge John C. Cratsley previously ruled that the Herald’s articles accurately reported on the litigation. After the case was reviewed by an Appeals Court judge, Scholz argued that the articles were “unfair” and published with “malice.”

Amateur rock historians will recall that Scholz is no stranger to litigation, and a few years back, Boston sued the now-defunct Artemis label alleging the band's 'Corporate America' album was poorly marketed and promoted. Had any legal precedent been established, there's no telling how many Matador artists from the early 1990's would have a case.

Help save a venue

A good friend of mine (who I once upon a time put on shows with) runs a venue over here in the UK down in Brighton, but sadly the venue is under threat of closure due to noise complaints (but actually there has only been one in the past 12 months) made to the local council.

They are looking to enforce a noise limiter on the venue which would mean any amplified equipment played would trip the limiter and effectively end all live music at the Freebutt.

Over the  years they've had a load of Matador bands play, with Fucked Up and Times New viking having played there recently and they've booked the Brighton show of the upcoming Shearwater tour, so it means a lot to us here to not see such a decent place go under.  Although many of you reading this might be far away I'd urge you to take 2 minutes out of your day to sign the petition against this happening here and you can read more about the story on the Freebutt's blog. Thanks!

This is what happens when the Memphis music scene stops being polite and starts getting real.  Jay - as always - plays the voice of reason.

Let this serve as a cautionary tale for the entire Matador roster; vomiting on the audience will not be tolerated in Judge Judy's court of (faux) law.

In the words of SF Weekly's Brock Keeling, "With all due respect to the plagiarist(s) of the latter, the former is way superior."

We couldn't put it better ourselves. Not without profanity, anyway.  (Thanks to Nils and Michael for the tip)

Land of the Free, Home of the Metal Names

Note to recently proud papa Adam Farrell: maybe Ella's nickname should be 'TimesNewViking?' What do you think? From our friends at the Associated Press:

Metallica may be a cool name for a heavy metal band, but a Swedish couple is struggling to convince officials it is also suitable for a baby girl.

Michael and Karolina Tomaro are locked in a court battle with Swedish authorities, which rejected their application to name their six-month-old child after the legendary rock band.

"It suits her," Karolina Tomaro, 27, said Tuesday of the name. "She's decisive and she knows what she wants."

Although little Metallica has already been baptized, the Swedish National Tax Board refused to register the name, saying it was associated with both the rock group and the word "metal."

The couple was backed by the County Administrative Court in Goteborg, which ruled on March 13 that there was no reason to block the name. It also noted that there already is a woman in Sweden with Metallica as a middle name.

"We've had to cancel trips and can't get anywhere because we can't get her a passport without an approved name," Tomaro said.

Ironically enough, if I recall correctly, original Metallica bassist Cliff Burton met his untimely demise in the home country of Jesper Eklow, so Swedish National Tax Board, if you're listening/reading and asking "For Whom the Bell Tolls," well it tolls for thee.

A Great Day In The Annals Of Guerilla Marketing 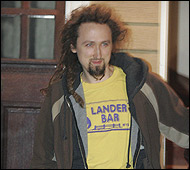 To the elected officials of Boston and Massachusetts who are knocking themselves out with their crazed grandstanding, I can only hope that none of you are ever placed in Frylock's Cloner.

(UPDATE :  A nice way to cash in on the lunacy, though I would hope some of the dough could go towards the defense fund of the poor schnook the Boston Police have made a scapegoat out of. )

The AP's Jennifer Quinn on what sounds like an open and shut case of copyright infringement.

Coca-Cola Co. may be making an unsigned London ska band famous in Argentina, but the band isn't happy about it.

The band, called 7 Seconds of Love, says Coke used their song "Ninja" and the video that goes with it without permission in a South American commercial for Coca-Cola Light.

The band learned of the advertisement when a fan asked about it. The discovery, lead singer Joel Veitch said, led to "righteous fury followed by deep irritation."

"Initially, we didn't think much about it, because we don't get Argentine television here," Veitch said. "It was when it turned up on the Internet that we went, `Oh my god.'"

The band doesn't want to take Coca-Cola to court, Veitch said, and couldn't afford a legal battle anyway because of their "extremely shallow pockets." Also, all the band's members have day jobs.

"The Coca-Cola Light spot in question was commissioned to a local advertising agency, Santo Buenos Aires SA, which assured Coca-Cola Argentina that each element of the advertisement was original," Kelly Brooks, a spokesman for Atlanta-based Coca-Cola, said Wednesday.

"Coca-Cola de Argentina acted in good faith in accepting the work, but in light of the allegations has asked Santo Buenos Aires to fully research and resolve this matter."

Consider that Veitch has been commisioned to do some pretty high profile advertising stuff thanks to his widely circulated Rather Good videos, this has to be a legal blunder for the ages. The only thing I find more outrageous than Coca Cola's actions is the plight of persons dying to purchasing the song who might not be able to do so.