Why Is Product Management At The Beggars Group Such A Highly Coveted Position? Yo La Tengo at Other Music's "All Roads Lead To Austin"

More footage can be found at the Other Music site, including a terrific Shearwater clip that I've not managed to swipe properly (the cat puked all over my copy of "Embedding For Dummies").

Greetings to the 1% of the american entertainment industry that isn't in Austin this week. My apologies to those of who weren't allowed to run away and join the circus, but look at the bright side : you get to watch the college basketball conference tournament games without anyone forcing a can of Monster Khaos energy tonic down your gullet.

While some of your weary & bleary friends from America's 2nd or 3rd Most Beloved Rock Independent Label are getting close to nap-time, I'll quickly summarize just a few of the highlights of SXSW so far :

1) Excellent sets from Yo La Tengo, Shearwater, Times New Viking and Jay Reatard
2) a Tommy Keene sighting on 6th st. (no gigs this week, sadly)
3) the ruination of one of my most beloved black tees courtesty of lots of curry ketchup and sauerkraut (what, you thought I'd be blogging about REM?)
4) The guy who asked me if the Matablog "was gonna be all about food from now on?" (see above)
5) the following murderers' row of killer performances : Tyvek, The Marked Men, Fucked Up, Pink Reason, Home Blitz, Trixter, The Distant Seconds. More news to follow. I'm told Patrick's on a panel about vinyl siding tomorrow, and we're planning on a 4-camera shoot of the event. Matador's first Blu-Ray disc?  Keep your fingers crossed!

To those of you in Austin who have the time/coherency to check the Matablog,

I am assuming that means you have managed to keep it together thus far, and now, I would like to invite you to loose your shit at the Times New Viking in-store at Waterloo Records!!

In today's Austin Chronicle, music industry vet Danny Goldberg (who once partnered with Matador at two major labels) channels The Wire's Thomas Klebanow. Danny remarks about the music business, "We have to do more with less" -- precisely the mantra of the bland, cost-cutting editor of the Baltimore Sun. To be fair to the Danster, he does go on to recommend that the industry be more open to experiment. But we'd hope that he doesn't think laying off talented creative types and pursuing flash in the pan stories is the wave of the future. Really, this was a tone-deaf moment for the former Led Zep publicist.

Despite the snazzy Thurston Moore design, I've neglected to pick up my SXSW goody bag. No offense to the organizers or their lovely sponsors, but I've got enough stacks of CD's I'm never gonna listen in my house already, thanks. But enough about my weekly care packages from 304 Hudson St. (hey, JUST KIDDING), the Chicago Sun-Times' Diablo Cody-baiting Jim DeRogatis (who kindly, though incorrectly ID'd me as the guy who signed Naked Raygun --- please, some long overdue credit for Sam Berger) reveals a rather peculiar inclusion in the 2008 bag o' swag : 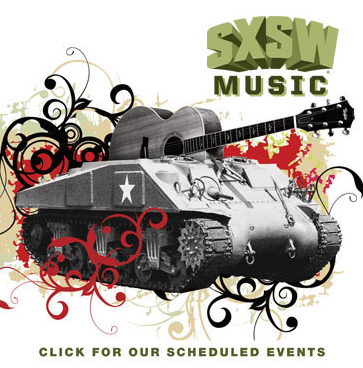 The most notable thing about this year’s bag, in addition to its skimpiness, is a green plastic toy soldier of the classic “kids’ army guys” variety, except this one is holding a guitar instead of a rifle, and he’s twisty-tied to a color card that identifies him as “Sgt. Solo,” brave representative of Armed Forces Entertainment. (Why they didn’t just go with “Sgt. Rock,” I’ll never know; maybe there were copyright issues.)

The blurb at the bottom of the card reads: “Plug in your weapon, turn up the power and fire away. Your limo is a Humvee and your ride is a Blackhawk. For over 50 years, America’s stars have earned their stripes by performing for our country’s greatest audience. Find out if you have what it takes to tour the world entertaining the troops with Armed Forces Entertainment.”

Yes, you read right: These are your tax dollars hard at work in a promotional effort to recruit rock bands to travel to Iraq and Afghanistan to entertain our troops. Mind you, if anyone deserves free entertainment, it’s the brave men and women making incredible sacrifices for their country overseas. But really, wouldn’t they be better served by the government spending that money on better benefits and health care, more useful gifts for a theater of war (like adequate armor on those Humvees) or, heaven knows, upping the diplomatic efforts to end these conflicts?

These are things worth mulling while visiting the group's Web site, which features an even more bizarre piece of promotional artwork via the illustration of a doctored Sherman tank -- the kind that won the “good war” of WWII -- with an acoustic guitar replacing the turret and gun barrel and a swirl of paisleys beneath the treads, all under the banner “SXSW Music.”

Many friends and foes alike are popping into Austin this week and out of the shear goodness of my aching heart, I'd like to pass along the following nutritional tip : Though you have many wonderful options for breakfast, dinner or lunch in this fantastic city, if you're a busy person, you'll never have time for all of them. 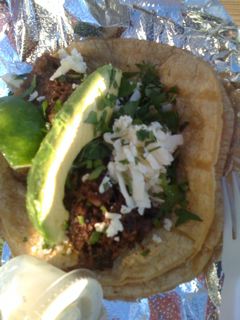 (above, below  : The Democrat, Green Chili Pork)

To put this as simply as possible, if you're gonna be in Austin for 4 days, that could well mean 12 visits to Torchy's Tacos. You might think I'm exaggerating  about this establishment's otherwordliness, but go to Torchy's once you arrive and then try eating elsewhere. At that point you can lecture me about overrating.

And if that means you're standing in a long line for an excellent taco while I'm watching these guys, well, it's a win-win for both of us.

Matador's Cavalcade Of Stars Set To Invade The Texas Capitol

I won't be wearing a "Welcome To Austin : Now Fuck Off" tee next week, mostly because a) I hate slogans and b) there's too much ketchup on the shirt to wear it in public (again). However, in the interests of keeping you, our close friends, fully informed, we've assembled as complete a list as possible of all the events various Matador recording artists are playing next week during the South By Southwest Clusterfuck (tm). Please be advised that we're gonna list the officially sanctioned SXSW events separately from the day parties, after hours bashes, gigs in non-participating clubs, etc., because we don't wanna mislead anyone. Much like everything good in this world, the below gigs are subject to change. If you can't get in, there's undoubtedly something else going that's not nearly as crowded a few feet away.

UNOFFICIAL, NOT CONNECTED TO SXSW-AT-ALL (OTHER THAN TAKING ADVANTAGE) SHOWS :