spiral here from the pavement. we are about to embark on our very ambitious world tour in a couple days. march 1 is the first date and it's in a place very special to our hearts... new zealand. we've got the great 3d's opening so it's gonna be a legendary night. we then travel across the tasman sea to my future country of residence, australia (i'm actually writing this to you from brisbane where i'm spending a few days torturing my fiance and her family practicing the songs before the tour starts). speaking of practice, we recently had two good weeks of practice in portland. it was the first time some of us had been in the same room together for close to 10 years. i think we all were a little nervous. it started off pretty rough, except for our drummer who probably practiced the most. but... by the time we had finished, most of the 40 plus songs we had rehearsed were sounding pretty good. we're really looking forward to the year ahead and seeing all the fans out there digging the music makes it all worthwhile. so thank you for buying tickets. we've also got the cool 'qtp' best of comp coming out march 9. it was compiled by the band and includes all our faves from the catalog.

also... thanks to all for buying the spiral stairs record. i'm planning some shows in the new year in between the pavement maelstrom. we're set to play all tomorrow's parties in the uk and maybe some others around those festival dates. as for north america, look for shows in june or july in the midwest and east coast.

in the meantime, enjoy these photos from portland... 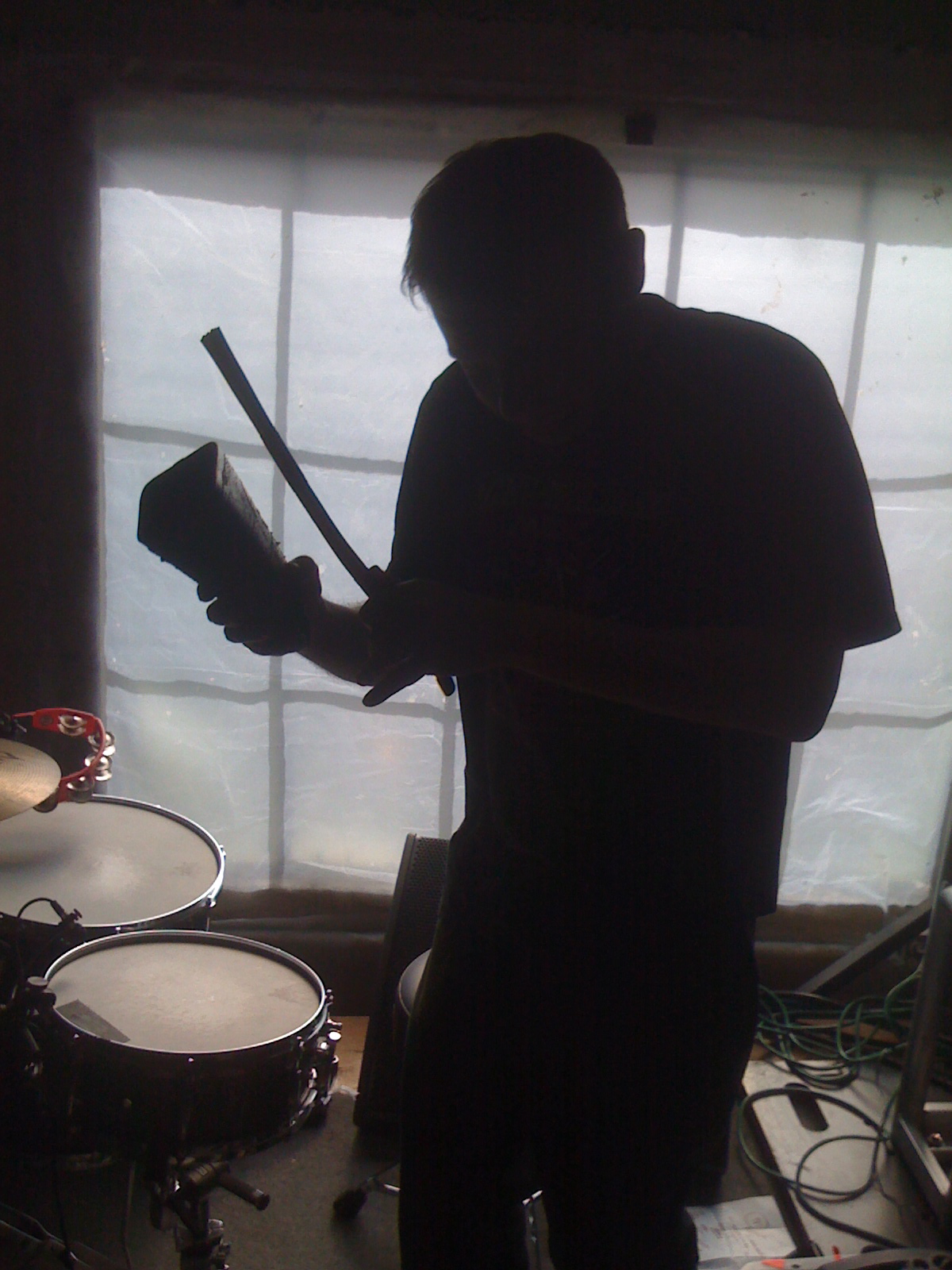 AOL Spinner brings us the second video (here is the first) from Spiral Stairs and director Jess Carfield. Spiral's awesome new album, The Real Feel, is available for purchase here. 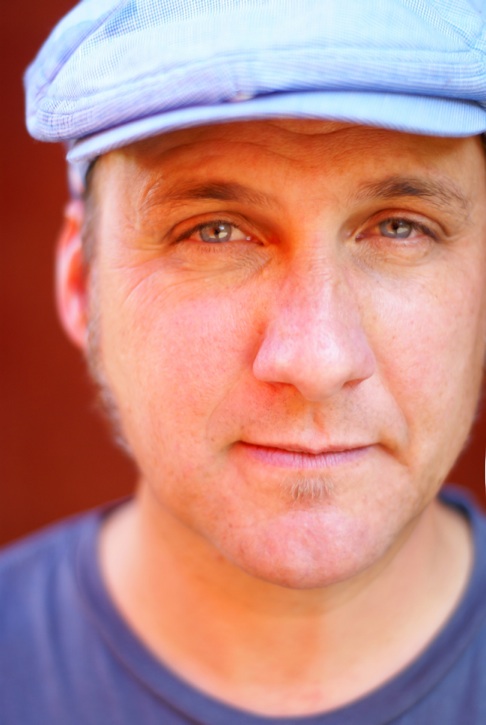 Tune in to KUSF this afternoon for a special solo live performance by the one and only Spiral Stairs at 4 PM Pacific/7 PM Eastern. San Franciscans can listen at 90.3 FM, while those in the wider world web can point their internet machine to kusf.org.

Today we have the privilege of unveiling the first video from Spiral Stairs' The Real Feel, out October 20 and available for pre-order here.

The song is "Stolen Pills," and the video was directed by Jess Carfield.


Don't forget, you can stream the entire record at Think Indie right now, and it's GREAT, no JK maybe the most "spun" album in the office right now.

And there are a few tour dates left (I hear Spiral is selling the album on the road!): Yep, in just over 90 short minutes, Spiral Stairs will be performing live on the illustrious KEXP in Seattle. Scott Kannberg and band will be sure to highlight jams from the new album, The Real Feel, out next week. Also, if you're in the 206, and you missed their in-store last night at Sonic Boom Ballard, you can still catch them tonight at Neumo's playing with the lovely Bob Mould. And, as always, KEXP is heard locally at 90.3FM and online at KEXP.org.

While we're still about a week away from the October 20th release date of the new Spiral Stairs album "The Real Feel" you can hop over to the ThinkIndie site and stream the album in its entirety right now.

For those who don't know ThinkIndie is a digital music store run by a bunch of real record stores. 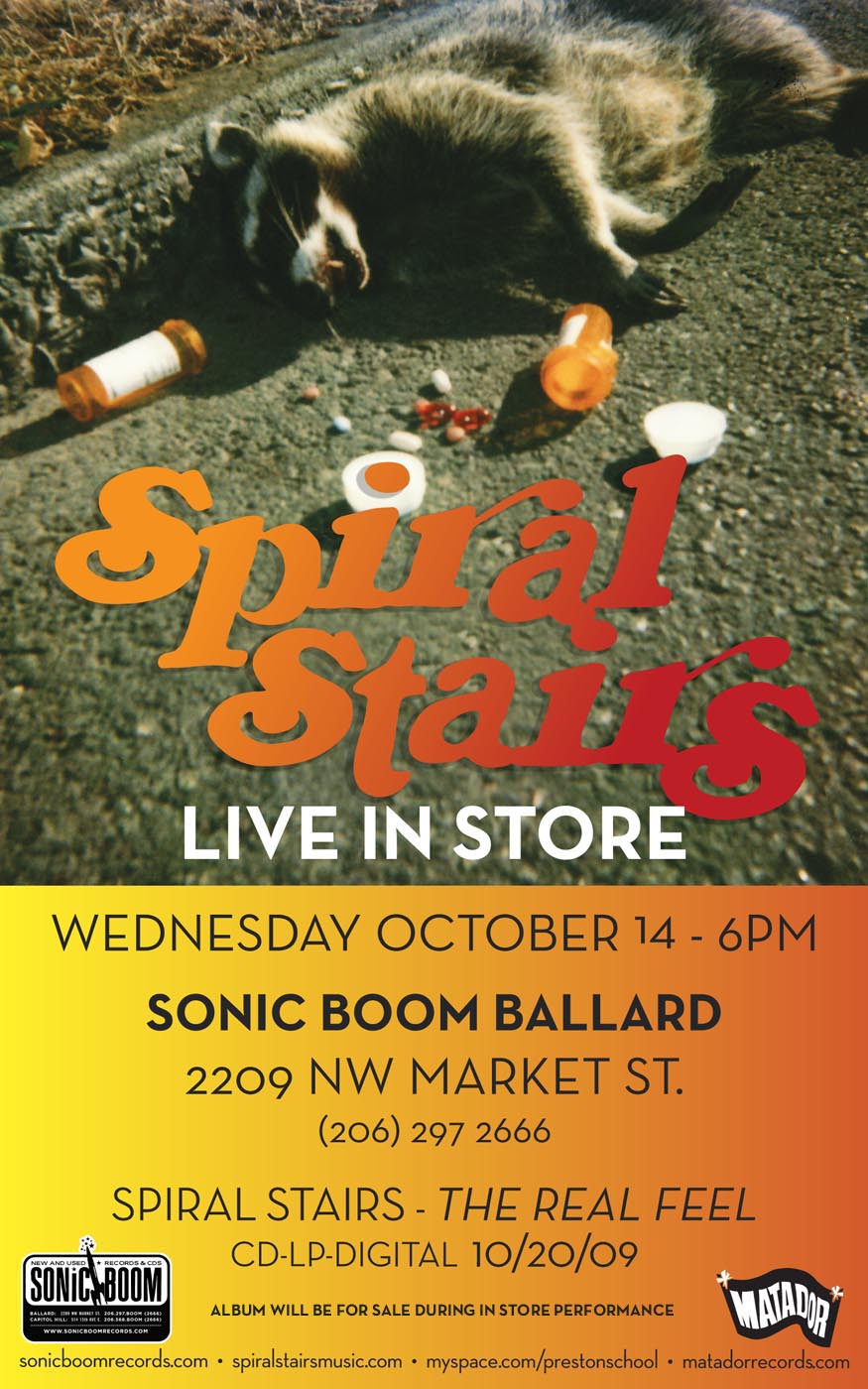 Well, dear friends, here it is... In celebration of the release of his first album under the SS moniker, Spiral is taking Seattle by free-live-instore storm. Check it. Don't wreck it. 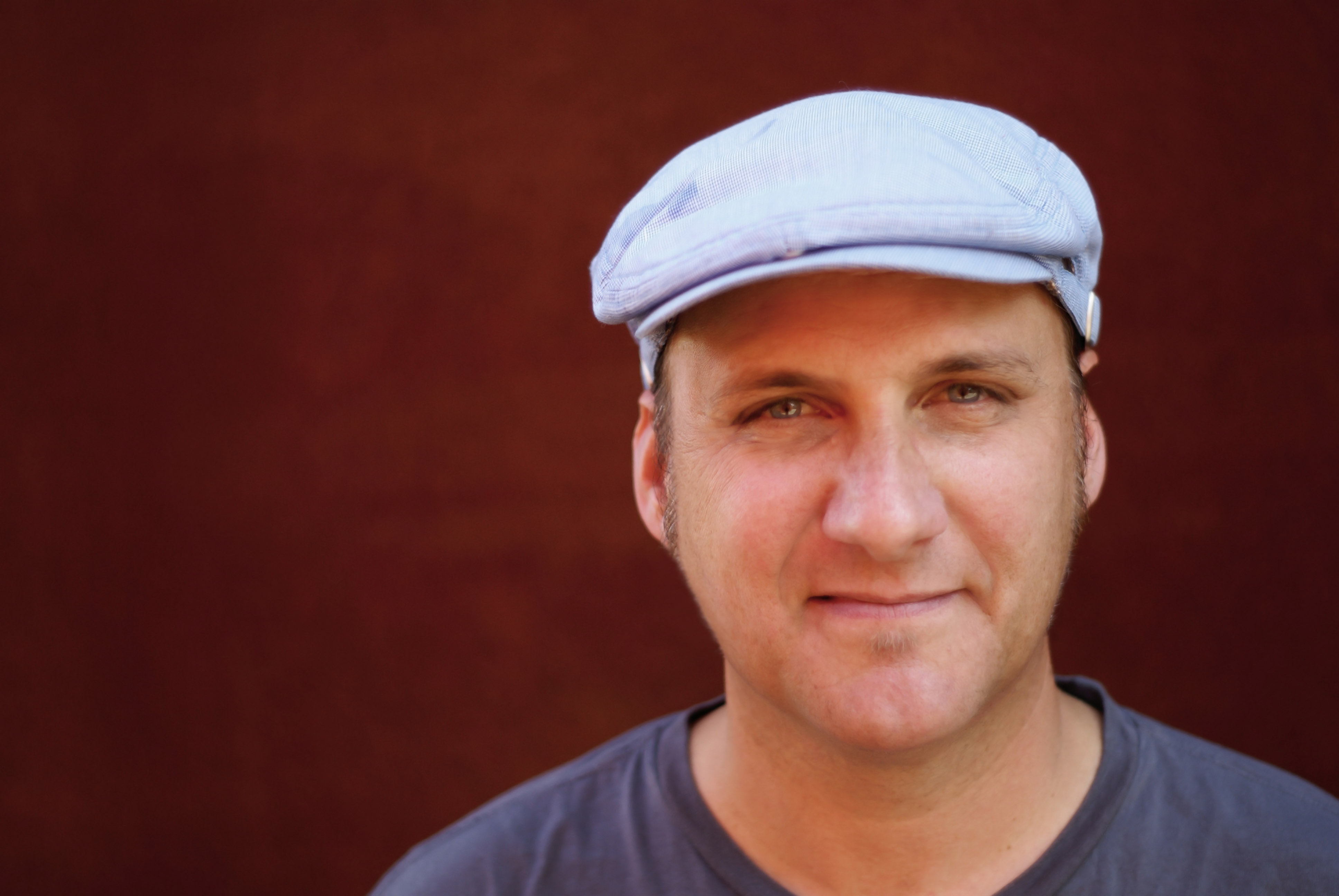 Y'know, in the midst of all the hoopla surrounding Pavement's return to the concert stage , there's probably a tendency to overlook the forthcoming release of the first album to formally bear the Spiral Stairs nom de plume. Which is a lowdown, dirty shame, as Scott Kannberg has crafted the most (equal parts) brooding-funny-catchy-smart work of his post-Pavement oeuvre in the form of 'The Real Feel'.

In addition to the following dates (all supporting Bob Mould other than 10/18),  there will be a Spiral Stairs performance at Sonic Boom's Ballard location (2209 NW Market St.) on Wednesday, October 14 (6pm).  Though 'The Real Feel' isn't formally released until October 20, Sonic Boom will have copies of the CD and LP available that day. After a pair of albums under the group nom de plume Preston School Of Industry, Pavement co-founder Scott Kannberg, aka Spiral Stairs, makes his bona fide solo debut with an October 20 LP/CD/digital album release of 'The Real Feel' (OLE 858).  Following an extended sojourn in Melbourne, Spiral returned to Seattle rejuvenated at the end of '08, and commenced recording with a collection of pals including members of PSOI, the Posies, guitarist Ian Moore, Gersey, and Broken Social Scene's Kevin Drew.  Mixed by the Posies' Jon Auer, this album is by far the most crafted and introspective of Spiral's post-Pavement works.

In the words of associate Parker Gibbs, 'The Real Feel', "has a vibe similar to classic 70's albums by Fleetwood Mac ('Then Play On'), Captain Beefhart ('Safe As Milk'), and guitar god Richard Thompson, not to mention Aussie psych rock icons Died Pretty. Comparisons aside, this is 100% Spiral Stairs rock, the same rock that made Pavement the most influential band of the 90"s (take that Hoobastank!) and the same strange, dischordant, playful and melodic Spiral Stairs rock that your parents loved."

"This is indie rock at its best and brightest," continues Gibbs,  "with Spiral Stairs getting back to the basics that have made him a legend in his own mind and to all of the children willing to enter his home."  And on that somewhat troubling note, we'll add the vinyl edition of 'The Real Feel' features a different running order and a limited edition bonus 7".   Live activity throughout the continent of North America is planned for this Autumn, and we'll surely be letting you know more about that in the days and weeks ahead.

The first track we've seen fit to leak from 'The Real Feel' is "Maltese Terrier" (MP3).  Please note no raccoons were harmed during the making of the album artwork.  Not by us, anyway.