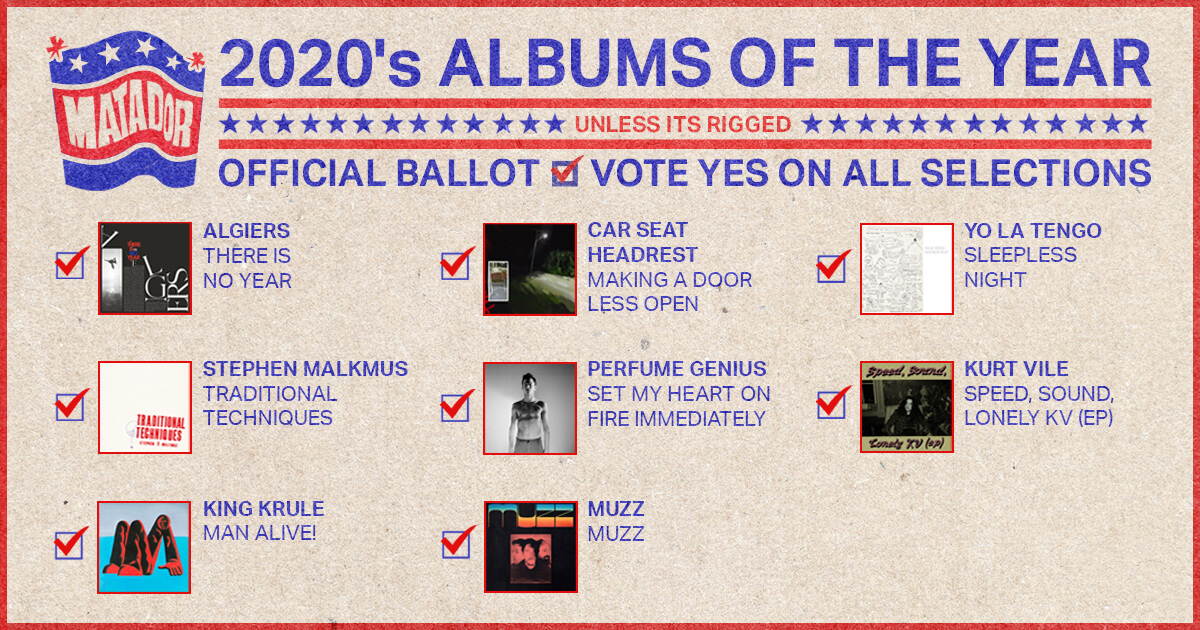 so there's another (possibly less important) campaign happening and we'll be damned if Matador's not gonna figure squarely in the album of the year results. So here's your chance to stuff the (virtual) ballot box and save 25% on any of our vaunted 2020 releases. We're so intent on buying your affections, you can save 25% on anything from the label catalog except preorders.

Last month, Muzz released their self-titled debut, “an album that bears the tide marks of its creators — Matt Barrick’s jazzy swing, multi-instrumentalist Josh Kaufman’s soft warmth, Paul Banks’s instantly identifiable baritone — but it defies easy categorization” (The FADER). Today, the longtime friends and collaborators present a video for the laid back and nostalgic “Summer Love.” On “Summer Love,” muted organ by Kaufman and flute by Stuart Bogie drift along as the song rides out on the main vibe and vocal line by Banks: “I?m in the race//I?m on the get-go//I wanna skate//I want the XO// Summer love//Summer love ends//Silence is sung we won?t remember.” The video combines “footage Matt shot a few years ago of a deserted drive-through theater, with clips we individually generated during lockdown and the majestically psychedelic collage work of the great Andrew McGranahan. It’s what we feel is a nice visual poem to accompany the song,” says Banks. “Rather than a summer lockdown document, we aimed more to emulate the work of Truffaut, Fellini, or Cassavetes and to capture three stories of romance and solitude. Lofty aspirations, humble result; but we hope you enjoy it even a fraction as much as we did creating it.”

VIDEO : Muzz - "Everything Like It Used To Be" (acoustic)

Earlier this morning, Muzz debuted an acoustic performance of "Everything Like It Used To Be' ; the studio version can found on the trio's recently released debut album, 'Muzz'.

This morning, Muzz release a new single/video from their forthcoming self-tiitled album, “?Knuckleduster?,” which follows the previously released “?Red Western Sky,?” “?Broken Tambourine,?” and “?Bad Feeling?.”  Brimming with wall-to-wall guitars, reverberating pianos and a thunderous performance from Matt Barrick, ”Knuckleduster” is Muzz at their most immersive and grandiose. Shot below the American Treasure Tour Museum, t?he “Knuckleduster” video brings the focus to the song’s spacious sonics and musicianship of Barrick, Paul Banks and Josh Kaufman. “?While we were shooting the video for ‘Red Western Sky,’ we discovered this great space underneath the museum. Unplanned, we quickly set up and started filming again - capturing the video for ‘Knuckleduster’ on the same day?,” says Banks. “H?air was greener and times were simpler back then.? ”

After last week's at-home live recording of "Bad Feeling", Muzz preview another track from their forthcoming self-titled debut album in acoustic form, "Trinidad" with a DIY video released earlier today (below). 'Muzz', the resulting partnership of Paul Banks, Josh Kaufman and Matt Barrick, is out June 5.

Leading up to the June 5th release of their self-titled, debut album, 'Muzz', the new project of Paul Banks (Interpol), Josh Kaufman (producer/multi-instrumentalist and one third of Bonny Light Horseman), and Matt Barrick (drummer of Jonathan Fire*Eater andThe Walkmen), release their first-ever live recording - a performance of “Bad Feeling.” For the video, the trio play from the cities where they’re currently staying home - Banks in Edinburgh, Kaufman in Brooklyn, and Barrick in Philadelphia. Using the available resources in their respective residences, the stripped-down performance can be seen above. The studio version of "Bad Feeling" can be found on 'Muzz', available via all digital services and on LP and CD. Muzz, the new project from Paul Banks (Interpol), Josh Kaufman (producer/multi-instrumentalist and one third of Bonny Light Horseman), and Matt Barrick (drummer of Jonathan Fire*Eater, The Walkmen, and Fleet Foxes’ touring band), will release their self-titled, debut album, on June 5th.  The album, written, arranged and performed by the trio, is dark, gorgeous, expansive and soulful.

Muzz was born out of longstanding friendship and collaboration. Banks and Kaufman have known each other since childhood, attending high school together in Spain before separately moving to New York. There, they independently crossed paths with Barrick while running in similar music circles. They kept in touch in the following years: Barrick drummed in Banks + Steelz and on some of Kaufman's production sessions; Kaufman helped on Banks’ early Julian Plenti solo endeavour; various demos were collaborated on, and a studio was co-bought.

Taking shape at a simmer, the first Muzz recordings date back to 2015. A typical session incorporated demos Banks or Kaufman brought to the table with room for any member to build upon, or with a new skeleton composed during a jam in the live room. All three contributed lyrics and helped shape things vocally (a first for Banks who is usually the sole lyricist).

“Josh has more training as a theory musician while Paul comes from a different perspective,” Barrick says. “You never know how Paul’s gonna approach a song, lyrically and melodically, so it’s always unusual and exciting. Everyone is open to everyone else’s ideas. I think three is a great number of people for a band. We all had a big hand in everything."

Sonically, “the music has this weird, super removed vibe but is also personal and emotional at the same time,” Kaufman says. “If something felt natural in a simple way, we left it. I’d never heard Paul’s voice framed like that—a string section, horns, guitars—we know none of that is visionary but it felt classic and kind of classy.” In fact, the band’s name holds a meaning that serves to describe that very feeling - Kaufman used the word “muzz” to describe the music’s subtle, analog quality and texture.

In conjunction with today’s announcement, Muzz present the galloping “Red Western Sky” with a video, directed and produced by the band. It’s the first video to ever be shot at the immersive, psychedelic American Treasure Tour Museum, a location chosen after a Barrick family visit. The single follows two previously released songs—the sparse and rustic “Broken Tambourine” and “Bad Feeling,” which chimes with melodic introspection. No matter the sonic direction Muzz go, they go there as if effortlessly and with maximum emotional charge.

“Ultimately, the music speaks for itself,” says Banks. “We have a genuine, organic artistic chemistry together. It’s partly a shared musical taste from youth, as with me and Josh, but then it’s also the souls of my friends that resonate with me when expressed through music. I think it’s cosmic.” 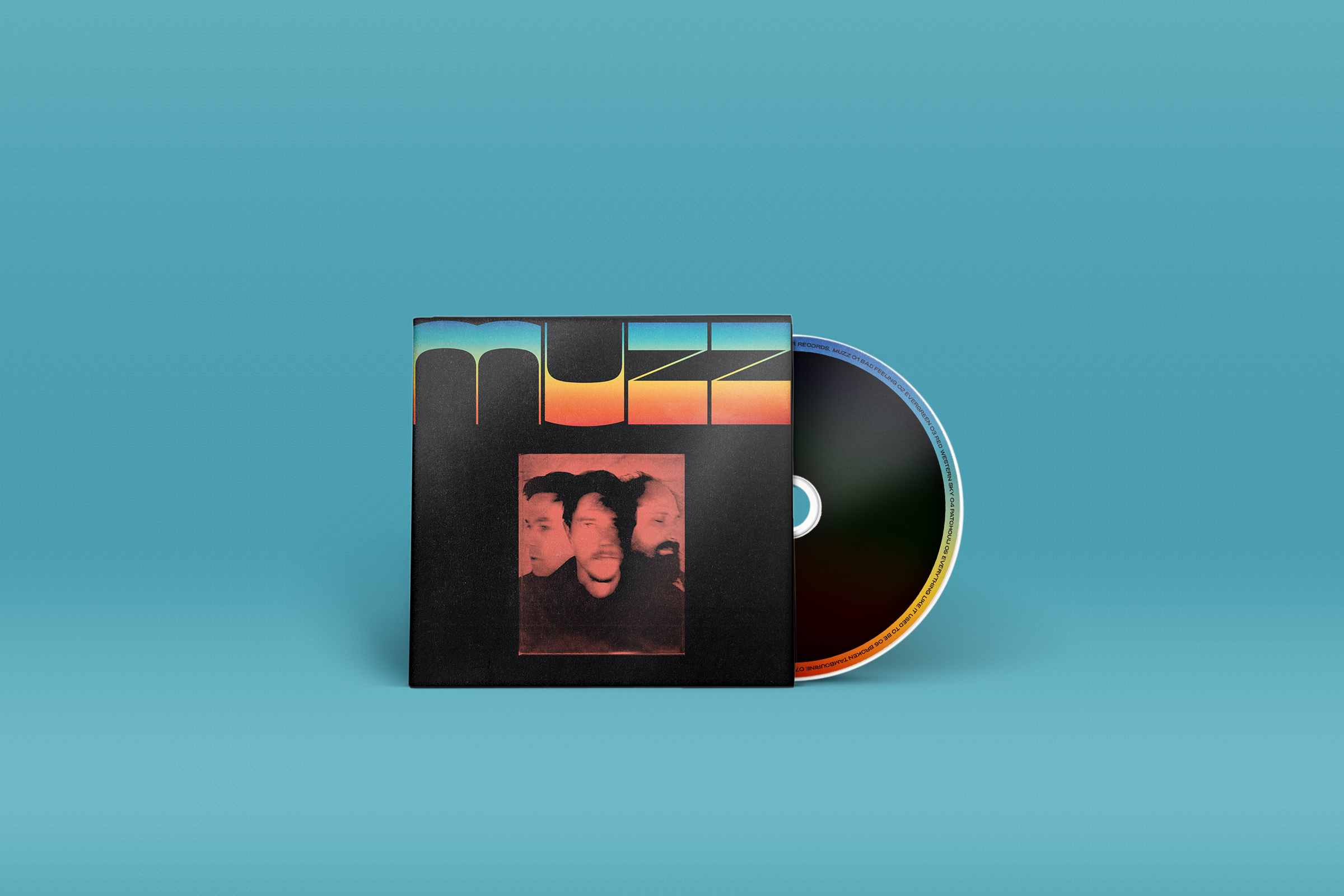 Muzz is the new project of Paul Bank (singer of Interpol), Josh Kaufman (esteemed producer/multi-instrumentalist and one third of Bonny Light Horseman), and Matt Barrick (drummer of Jonathan Fire*Eater, The Walkmen, and Fleet Foxes’ touring band). Today, the trio release their first official single/video, “Broken Tambourine”. “Broken Tambourine” begins with sparse, floating piano by Kaufman, before surging with Banks’ rumbling vocals, Barrick’s low percussion, and a lilting clarinet, while an open door during recording brings in the surrounding nature sounds of the studio in Woodstock and augments the song’s spacious atmosphere. Written, arranged and performed by all three, it perfectly encompasses the collaborative essence of Muzz, a group with recordings dating back to 2015, but, cosmically speaking, with seeds planted long ago.

So how did we get here? Why, casually, of course. Banks and Kaufman have been friends since their formative teen years, having attended high school together overseas before separately moving to New York City for further study. They independently crossed paths with Barrick while running in similar music circles. Some years on, they each remained in touch: Barrick drummed in Banks’ project with The RZA, Banks + Steelz, and on some of Kaufman’s production sessions; Kaufman helped on Banks’s early Julian Plenti solo endeavor; various demos were collaborated on; a studio in Philadelphia was co- bought; “what if”s and “we should”s were tossed about. When the opportunity to make music as a trio presented itself, the gentlemen pounced.

While “Broken Tambourine” is the band’s first official song for Matador, earlier this month, Muzz dropped “Bad Feeling” anonymously via Soundcloud. Stereogum recognized it as “a surprisingly loose and low-key indie track that piles on layers of beauty as it goes.” It chimes and slinks with a touch of panache as Barrick’s kick drum pushes the tune along and Kaufman’s Farfisa fills the space. Together, these two initial numbers from Muzz offer an early glimpse into the band’s dark and expansive sound, and genuine artistic chemistry.