Intended Play 2012 - For The Vinyl-Phobic Amongst, The Price Just Dropped From $2 To Free

(I really don't see the resemblance)

Back in early January WE SHOCKED THE MUSIC WORLD with news of a $1.98 Matador/True Panther Sounds sampler LP including (mostly) new songs from The Young, Ceremony, Lee Ranaldo Tanlines, Perfume Genius, Stephen Malkmus & The Jicks, Fucked Up, Girls, Cold Cave, Esben and The Witch and Kurt Vile. It's come to our attention that a) there's a few stragglers out there who've yet to order this limited edition LP, and b) some of you either trashed your record players or simply prefer music in digital form.

So here's the deal --- or hound your local retailer who might've filed it in THE $2 BIN.  Failing that, here's a free download of the entire compilation. You're welcome!

Out today: the Intended Play comp and the first single in Singles Going Home Alone: Stephen Malkmus & The Jicks split with LA Guns

It's Tuesday, January 17 which means our first two releases of the New Year are out today. First up is Intended Play, the new ultra-budget vinyl-only sampler from Matador and True Panther. The 11-song LP is $1.98 list price - you can actually order it direct for only $1.80 by clicking on the title above. It contains new tracks from THE YOUNG, CEREMONY TANLINES, LEE RANALDO, PERFUME GENIUS and STEPHEN MALKMUS - all of the above from upcoming releases except the SM track which won't appear elsewhere, and recent hits (some of them rare) from KURT VILE, GIRLS, FUCKED UP, ESBEN & THE WITCH and COLD CAVE.

Next is the first single in our new 2012 singles club, SINGLES GOING HOME ALONE. It's an unexpected conjunction between STEPHEN MALKMUS & THE JICKS and the legendary LA GUNS, covering each other. Hear Malkmus jam on "Wheels Of Fire," and Tracii Guns pull out the stops on "Gorgeous Georgie." Sleeve art at the top of the post.

It's not too late to sign up for the singles club, which gets you six exclusive limited-edition 7"es, one every other month this year, plus a special bonus record, an exclusive tote bag and a yearlong 10% discount on all items at the Matador Store, for only $45 including shipping within the US:

The next two confirmed singles are from Austin's OBN III's on March 20, and Brooklyn's The Men on May 8, with subsequent the singles on July 10, September 11 and November 6.

Intended Play 2012, the vinyl bargain of the year & some good music to boot Today we're psyched to tell you that OLE-981 is the Matador Records & True Panther Sounds' 2012 Intended Play Sampler hits shelves on January 14. This (insanely) budget-priced vinyl sampler showcases new tracks and now-classics from the Matador/True Panther syndicate circa 2011-2012, and much like the Cherry Red sampler from which this LP finds inspiration, is destined to rank at #1 on all music retail charts.

Revisit your favorites from 2011, and get a preview of 2012 from your friends at Matador Records and True
Panther Sounds for under two dollars! 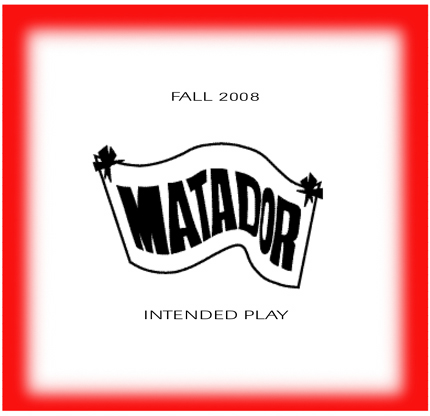 Our spring Intended Play label download sampler was a huge hit, so we're doing it again. Just like before, you get a track from one of each of our current and upcoming releases. Seven of the tracks have not been released on MP3 yet, and four of those are from albums that haven't been released yet. The sampler this time is a bit more varied musically, from A.C. Newman's jewel-like pop songscapes to the majestic neo-punk of Fucked Up to the gorgeous female vocals of Jennifer O'Connor to a track from Lou Reed's painstaking, thoughtful, first-ever performance of his controversial classic album 'Berlin.' We also introduce an unreleased song from Pavement's 'Brighten The Corner' sessions, due out on the deluxe edition of that album in November.

Click on the link to get a zipped file of all 13 tracks plus front and back artwork, and burn it yourself (or just listen to it digitally). And support the bands and the label... if you like the track, click on the album title link below to buy (or preorder) the album (or more individual tracks) directly from us.

1. A.C. Newman There Are Maybe Ten Or Twelve (from Get Guilty, due out January 20)
2. Belle and Sebastian The State I Am In (BBC Version) (from The BBC Sessions, due out November 18)
3. Jennifer O'Connor Here With Me (from Here With Me, released August 19)
4. Shearwater The Snow Leopard (Remastered) from Rook, released June 3)
5. Lou Reed Caroline Says, Pt. II (Live) (from Berlin: Live At St. Ann's Warehouse, due out November 4)
6. Mogwai The Sun Smells Too Loud (from The Hawk Is Howling, released September 23)
7. Fucked Up No Epiphany (from The Chemistry Of Common Life, released October 7)
8. Jay Reatard An Ugly Death (from Matador Singles '08, released October 7)
9. Jaguar Love Humans Evolve Into Skyscrapers (from Take Me To The Sea, released August 19)
10. Pavement Cataracts (from Brighten The Corners: Nicene Creedence Ed., due out December 9)
11. Brightblack Morning Light Oppressions Each (from Motion To Rejoin, released September 23)
12. Times New Viking Call & Respond (from the Stay Awake EP, released October 14)
13. Condo Fucks What'cha Gonna Do About It? (from Fuckbook, due out March 2009)

For the first time, we're making our annual 'Intended Play' label sampler available digitally. Click on the link to get a zipped file of all 12 tracks plus front and back artwork, and burn it yourself (or just listen to it digitally):

1. Jay Reatard Always Wanting More (from 7" #3, due out June 24)
2. Times New Viking DROP-OUT (from Rip It Off, released January 22)
3. Stephen Malkmus & The Jicks Cold Son (from Real Emotional Trash, released March 4)
4. Shearwater Leviathan, Bound (from Rook, due out June 3)
5. Cat Power Metal Heart (from Jukebox, released January 22)
6. Matmos Polychords (from Supreme Balloon, due out May 6)
7. Mission Of Burma That's How I Escaped My Certain Fate (from Vs.: The Definitive Edition, released today, March 18)
8. Jaguar Love Bats Over The Pacific Ocean (from Take Me To The Sea, due out this summer August 19)
9. The Cave Singers Helen (from Invitation Songs, released last September)
10. Dead Meadow I'm Gone (from Old Growth, released February 5)
11. The New Pornographers All The Things That Go To Make Heaven And Earth (live) (from Live From Soho (iTunes Exclusive), released March 11)
12. Earles & Jensen Bleachy Is Back In Town, Look Out (from Just Farr A Laugh Vols. 1 & 2: The Greatest Prank Phone Calls Ever!, due out April 22 May 6)

The sharp-eyed among you will note that some of these tracks are not the ones released as promo MP3s to date.