What better way to commence your summer with Belle and Sebastian, Savages, Shlohmo and Tobias Jesso Jr joining this killer lineup at FYF Fest on August 22nd in LA, California.

You can buy tickets here. link courtesy VHS Summer. The W.W. signature Pontiac Aztek is well beyond the means of the average Matador Records-buyer, so perhaps these sneakers are a better holiday option.

If the headline above fills you with questions, questions such as 'why would I write to the FCC?' or 'what's KUSF?' or 'isn't the Belle And Sebastian plug kind of gratuitous?', well, allow me to answer the first two.

The condensed version: KUSF is the University of San Francisco's community radio station, and has been since 1977. That means they've been around almost as long as The Fall (though I don't think they've had as much staff turnover). Last month, USF secretly sold KUSF's transmitter, abruptly took them off the air, and kicked everyone out of the station, with plans to transition the place to an Internet-only concern. Not surprisingly, KUSF's DJs and staff, almost none of whom had any notice of the sale until they were escorted from the premises, think that's a pretty fucked up thing to do, and we agree with them (as does Ty Segall).

By now you may be wondering what you can do to help KUSF get back on the air and back to being the incredibly valuable community resource it's been for over three decades. Well, as the title of this post states, today is the LAST DAY that you can write to the FCC urging them to stop the sale. There are succinct directions on how exactly to do so posted HERE.

Additionally, the exiled KUSF volunteers have set up a Paypal account for people to donate toward their legal fees. Generous souls can open up their pocketbooks HERE.

Artwork Analysis Corner : Can Someone Please Help Me Out?

I consider myself a somewhat culturally aware, open-minded person. Heck, I've been to Canada a couple of times. And I don't consider myself to have a knee-jerk, negative reaction when it comes to themes of overt sexualty, demonic imagery or collaborations with Klaus Meine. All of that said, I have NO FUCKING IDEA what is going on with the record cover above.

I am not hear to disparage Ms. Pesch's impressive musical achievements (even if her website crashed my computer several times while composing this post) but I'm thoroughly baffled by this sleeve. Were the title of the album, '25 Years In Torn Clothing While Presiding Over A Mass Burial Ground", I'd have a much easier time with it. In any event, as someone in the music business who recently celebrated an important anniversary, I'm sure I speak on behalf of everyone at Matador in congratulating Doro on hitting the big 2-5.

Help save a venue

A good friend of mine (who I once upon a time put on shows with) runs a venue over here in the UK down in Brighton, but sadly the venue is under threat of closure due to noise complaints (but actually there has only been one in the past 12 months) made to the local council.

They are looking to enforce a noise limiter on the venue which would mean any amplified equipment played would trip the limiter and effectively end all live music at the Freebutt.

Over the  years they've had a load of Matador bands play, with Fucked Up and Times New viking having played there recently and they've booked the Brighton show of the upcoming Shearwater tour, so it means a lot to us here to not see such a decent place go under.  Although many of you reading this might be far away I'd urge you to take 2 minutes out of your day to sign the petition against this happening here and you can read more about the story on the Freebutt's blog. Thanks!

UPDATE: We've put on our charity hat and will now be holding this event as a benefit for the victims of the recent flooding in Nashville. If you plan on attending Harlem's free instore next Thursday May 13 please bring donations, non-perishable food items, spare clothing, whatever you've got. The wonderful staff at Grimey's will be handling the intake of all donations with food donations going to Second Harvest Food Bank and monetary donations going to Hands On Nashville. Thank you.

Columbus Individual Promises : "WILL BE A DIVISIVE INFLUENCE FOR FOOD"

The only thing I don't like about this Craigslist ad is that the person who placed it might not be available to fulfill a similar service in other U.S. cities (link swiped from Terminal Boredom)

Are you in a band that's not going anywhere? Is there a particular member of your band that you want to be rid of but he's your best friend from grade school and you don't want to hurt his feelings? Did the bassist and your lead singer break up recently and now practice is three hours of awkward? Then I'm your guy.

Here's how it works. You bring me in. I play guitar. Doesn't matter if you need one, just bring me in.

Within 6 weeks, major changes will happen with your band. The drummer will accept a job offer out of state. The keyboardist will announce that he's getting married and the fiancee isn't into the whole band thing. The singer will be offered a better gig. One way or another, the band will fall apart. For my part, I won't say much or talk about anyone or complain. I'll just learn the songs, show up early for practice, and basically do whatever's required of me.

But we will never play out. The band will dissolve before that ever happens.

In some cases, just firing me will be enough to get your band moving in the right direction, but to be honest that doesn't happen very often. Usually it's something innocuous and it causes the band to break up.

Here's the deal, though. Some of the remnants will re-form a new band and they will thrive.

I'm asking for $300 up front. It's up front because, face it, we're not going to make any money gigging.

Thor To Governator : Brother, Can You Spare A Fighter Jet?

(from 1976, Thor on "The Merv Griffin Show". Taken from the unreleased DVD box set, "Thor : The Proto-Piazza")

Who amongst us hasn't sat awake at night fantasizing about various rock icons reaching out to state Governors for assistance? For instance, Larry Lifeless would like Deval Patrick to tear up some parking tickets. Bobby Steele having a word with David Paterson about widening lanes on the NY State highways (admittedly, I might be mixing this up with a "Seinfeld" episode). Sometimes, however, reality is far more amazing than anything we might come up with while high, as the following item from that treasure trove of insane press releases, Blabbermouth.net, illustrates.

Jon Mikl Thor has sought help from his old friend and fellow bodybuilder, California governor Arnold Schwarzenegger. Jon has asked Arnold to see if it was possible to board a military plane bound for Germany at the Beale Air Force Base in Northern California, 45 miles from Sacramento, to attempt to perform a concert at the Keep It True festival in Lauda-Königshofen, Germany on April 23.

Jon has helped Arnold before by performing with his band THOR at the Beale Air Force Base to entertain the military.

"The volcanic ash from the Icelandic eruption has stopped all travel from North America to Europe for commercial airlines," Thor explained.

"I don't always ask Arnold for help but this is a special request. If Arnold ever needed my help, I would be there in an instant."

There are interesting parallels in both Jon and Arnold's life. Both Jon Mikl Thor and Arnold Schwarzenegger won the Mr. Universe championship in their careers. Both have also had successful movie careers. Jon is planning on running for office in Washington state and Arnold already is a governor of California.

Oh, The Places You'll Go: A Day In The Life Of A Non-SXSWer

You know, not everyone in the music industry descends upon Austin for the SXSW Music Conference. Somebody's got to hold the fort down. After all, these records ain't gonna sell themselves. This is my minute-by-minute account of March 18, 2010. 9:30 am: I'm here 30 minutes early because I had to be up and at the DMV by 8 am. Wondering who in Austin is still up drinking from last night. Office is eerily quiet.

11:18 am: Chase a dog around the office in an attempt to remove a mail order package from his mouth. Sorry J. Roger from Phoenix... let me know if your corners are bent.

11:43 am: IMing with my cousin about who it would be creepier to get hit on by (if we were girls): The Fonz or Alex P. Keaton.

2:03 pm: Realize that 99% of the fun of Polaroids is waiting for the pictures to develop. Bummed.

2:12 pm: Debate telling coworkers about my plans to time-travel.

2:45 pm: Watch #2 seed Villanova squeak out an embarrassing overtime win over #15 seed Robert Morris. Almost call the university to demand a refund of my tuition.

5:00 pm: Look up Facebook profiles of girls who dumped me in high school.

5:10 pm: Look up Facebook profiles of kids I beat up in high school.

5:30 pm: Use a Google application to determine the distance of my nightly jogging route. Feel great that it's 1.2 miles. Immediately feel awful that I felt great over 1.2 miles. 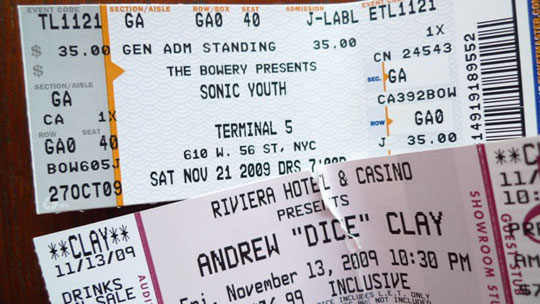 Sonic Youth, Andrew "Dice" Clay, there have been a lot of amazing shows in the past few days. Hickory-dickory-dock, folksss...

Aside from tonight's killer showcase lineup we've had a last minute addition for tomorrow (not related to CMJ), an all ages Pitchfork + Todd P benefit show at Market Hotel (Myrtle and Broadway) for Showpaper from 1pm until 6am - Cold Cave has been confirmed to play. and moar: Lemonade, Delorean, and Jamie (the XX) DJ set. 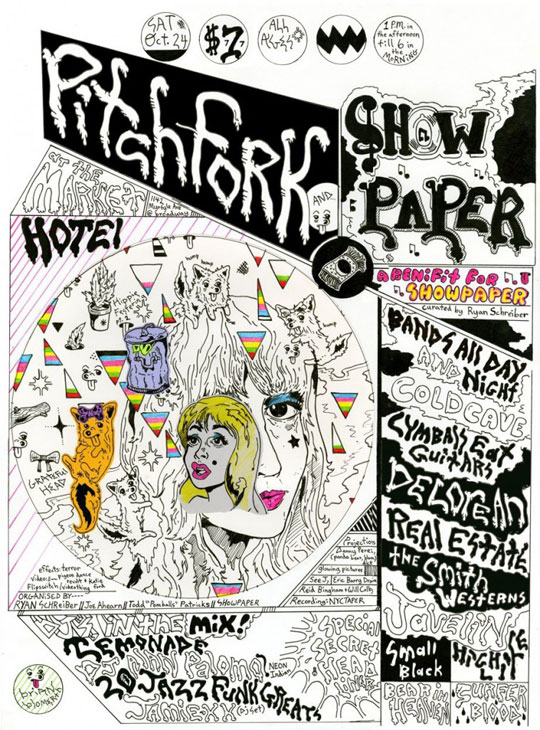