OK, while past years have featured a half dozen or more former Matador recording artists performing at South By Southwest, this year's batch of ex-lovers is a shorter, but no less spectacular list.  In addition to Early Man playing the Ale House on Thursday night at 1am,  18th Dye (above, as seen in New York last Autumn) are playing Submerged on Thursday at 11pm, and again Friday at Vogtsberger House (1402 E 2nd St) at 1pm.

We really oughta do these more often. Don't call it a comeback, these folks have been here for years. Or somewhere else for months.

1) Early Man.  Touring like crazy and there's a new EP on the Jarboe-tastic The End.

2) Jacob Morris, formerly one of the key characters beyond the dearly missed Double.  New EP on Rcrd Lbl

HEY DUDES
Fucked Up will be playing a free party at Santos Party House in New York tonight. It is free to get in and the band goes on at 11pm. Email [email protected] to try and get on the guestlist!

If you've not been following the adventures of the recently evicted Mike Conte of Early Man, a quick scan of the amazing videos posted at the new Early Mike.com should sort you out.  However, what might arguably be the site's highlight are the "Ask Early Mike" clips, the latest of which was posted this Monday. Did you know that aside from enjoying wine, women and bong, Early Man are huge hockey fans? It's true! In fact, Early Man drummer Adam Bennati used to play hockey when he was a young lad. And Early Mike frequently likes to beat on people. So needless to say, we LOVE hockey! Which is why we teamed up with 2KSports NHL 2K8 for this once in a lifetime offer. But before we explain this contest, let's start by getting you pumped up. Watch this:

Are you stoked? Psyched? Amped? Doesn’t that video game trailer look almost half as awesome as the song playing in the background? Well, here’s the deal. We are going to give away PS3 and XBOX copies of the 2KSports NHL 2K8 video game for free!! All you have to do is draw a picture of Early Man playing hockey. It’s so easy! We’re going to give you until next Wednesday, October 24th to complete the task. So we suggest that you stop stalking your ex-girlfriend on Myspace immediately ( it’s SOOO over...you’re not even in her top 8, dude) and use your time wisely by breaking out the markers/pencils/crayons and getting to work. We will announce and post the winning pictures on our page when it’s all said and done. Theres no age limit. Theres no IQ limit (unfortunately). Just like life itself, you can make this as complicated or as simple as you’d like. The choice is yours. Good luck! 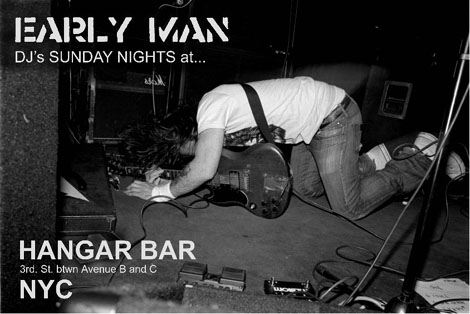 The promoters call it "Thrashfest '07", which you have to admit, is way catchier than "Festival Of Many Menacing Fonts" 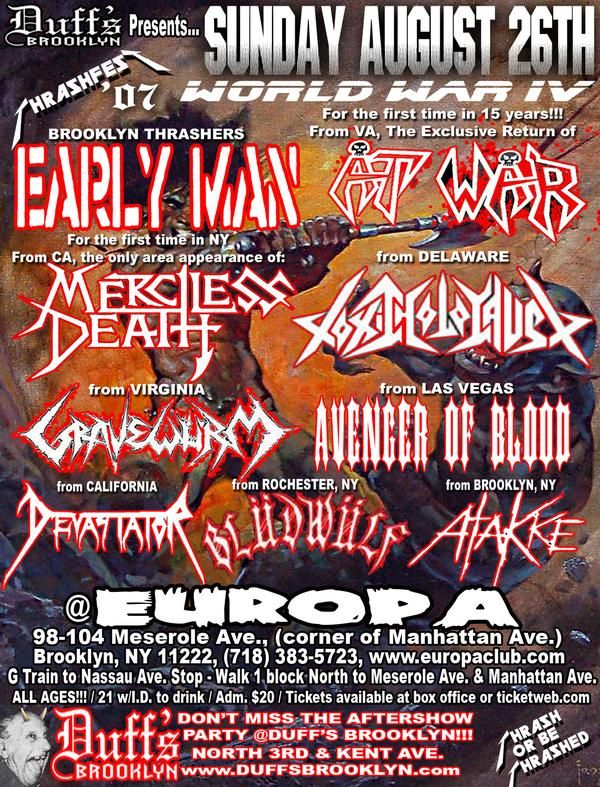 Head's Up Tom Menino! Early Man Are BACK

The following was culled from Early Man's mailing blast, but is far too delicious to remain un-cut and pasted : Early Man has teamed up with the fine people who create the best show on television and contributed a song for the upcoming AQUA TEEN HUNGER FORCE COLON MOVIE FILM FOR THEATRES!!!

The new song is entitled "More To Me Than Meat And Eyes" and is about the ATHF character MEATWAD.

The soundtrack, which along with Early Man includes songs from Mastodon, Andrew WK, Schooly D, and Unearth, will be available everywhere on 4/10/07 (Williams Street) so go pick up a copy.

Finally There's Something On NYC Afternoon Radio Worth Listening To : Early Mike, Minus The Mad Dog

the following message arrived in our super urgento box a few minutes ago :

This week on the almighty PIZZA PARTY East Village Internet Radio show Early Mike himself will be making a very special guest appearance. And the plot thickens because weekly host Max Wowch and Mike will be playing ONLY television and film theme songs. That's right, two full hours of that crap. You don't want to miss it. It might be your only chance to hear two grown men disect the brilliance of the Golden Girls theme.

Tune in Thursday, March 1st at 4pm by going to http://www.eastvillageradio.com

If you miss it you can still download it after the original broadcast. No excuses.

Though Chris Lombardi has been flooding in-boxes worldwide with the clip below, it took the analytical chops of Early Man's Mike Conte to really capture the essence.

Admittedly I don't really know the dude from a hole in the ground, but: If Doug Aitken had any balls whatsoever he'd take down those Konica/Minolta commercials he made for MOMA (I'm standing in the freezing cold with Richard Hell's daughter and 7 kids from Bard for THIS SHIT? Thank god Prime Burger is up the street) and project a real piece of art like this here. Step it up a notch, guy. You only live once.

Not since Fred Durst's thumb was featured on a sex tape has a cell phone video stirred such disgust.  Being the sensitive chap he his, Early Mike attempts to start the healing with a bit of poetry, inspired by the late, great Theodor Geisel.

I'm selling the shirt off of my back. No, seriously.

I always knew it would come to this. But I needed to take drastic measures, so...my favorite shirt is up for grabs.

BTW - If this sort of retarded shit is your cup of tea, I'm just getting started. And this is only the tip of the iceberg. You can subscribe via:

I should be getting wacked any day now. Oh well.

Shit You Hear At Parties, Pt. I Once again, we're invoking the late Robert Haber to sell something.   Hey, if it ain't broke, why pay for repairs. See you friday!

Yet another subculture falls to the power of Early Man's live prowess. Snowboarding bowed down en mass to the band last Friday night in Seattle and are now answering to us... stay tuned to a complete line of Matador custom boards, boots  and bindings.

You can read more about it in their corporate news missive HUH?  Anyway, we would like to issue an official warning to anyone who straps boots with polyurethane wheels on their feet... you're next!

Can You Handle The Truth?

Perhaps not, but Early Mike's gonna serve it up, anyway.

Early Man have the following gigs planned for October :

Goatwhore will be 2nd on both nights.