Following the cancellation of this weekend's Jabberwocky festival at the 11th hour, bands have been rushing to try and secure last minute shows to replace the failed festival.  For Matador artists, this is how the weekend currently looks, though as we've learnt this past week, not all times will be set in stone.

DARKSIDE were not able to find a suitable venue for the weekend (but still play Bestival in September). For the latest updates keep an eye on jabberwockyfallout.com.

Just added to the expanding line-up for ATP curated by The National are Kurt Vile and Perfume Genius, who both return to the UK for the event this December.  In addition to this, Kurt Vile announces his largest UK headline show to date, playing  December 6th at The Forum, London.

Rewind back to now, and this weekend sees Chavez playing the I'll Be Your Mirror weekender  in London, curated by Mogwai and ATP.  As a little refresher for those of you seeing Chavez on Saturday (4.15pm-5.00pm), here's the 2006 compilation 'Better Days Will Haunt You' on the Spotify player, below.

So, the time of Primavera and ATP festival (sadly their last ever May weekender) rolls around again and a ton of our bands decide it'd also be a good time to visit our (at the moment, rather sunny) shores. Just like last year.

With 3 European tours starting over this weekend, plus more to come over the next we have the following shows taking place over the next 25 days..... (though I'm not sure how much Golf they'll have time for)

Esben and the Witch

even the alumni are getting in on the act....

Fast forward to June and they're here to bring the 'Spin The Wheel' tour to the UK.

So if you live in Europe and none of those shows come by somewhere near you, well, its probably time to up sticks and move. Having already blown away a global audience with the webcast of their Matador at 21 set, the men of Chavez return to the stage next September 30, playing Asbury Park's Convention Center as part of the Portishead-curated All Tomorrow's Parties.   Said auditorium holds a rather special place in rock lore ; in addition to hosting early gigs by the Rolling Stones, Kiss, the Who and Led Zeppelin, the Convention Center was also the host for a 1956 Frankie Lymon & The Teenagers set that ended with three attendees being stabbed.  While we're hopeful history doesn't repeat itself, it might be a good idea for Chavez to consider a reenactment/exorcism of sorts --- surely there are any number of out of work thespians / supernaturalists (or perhaps a combination of the two) that might be available to assist.  We promise to forward all suggestions to the appropriate persons. As previously reported by our buddies over at ATP you're in for a treat if you happen to be in London this new years eve as there's an amazing gig with Sonic Youth headlining a 4-band bill. Make sure to get down there early to see Factory Floor opening the party, followed by The Pop Group and the 'ATP house band' Shellac, with Mr Stuart Braithwaite spinning records between sets.

The 'Together' bus keeps on rolling... 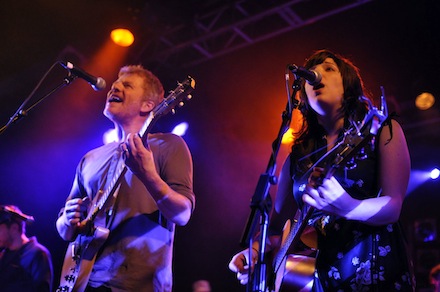 All this togetherness that The New Pornographers have been spreading shows no sign of slowing down, as hot on the heels of last nights sold-out London Electric Ballroom show they've announced details for a brace of UK festival dates and headline shows.

They're heading back this way in September before returning to headline London’s Shepherd’s Bush Empire and play the Belle & Sebastian curated 'Bowlie 2' ATP weekend in December - full dates below:

The band also performed "Crash Years" and "What Turns Up In The Dark" live on Mark Riley's BBC radio show, which you can listen to here (only in the UK, sadly), just skip 12 minutes in. It's that time of year again - where if you want some Matador shows, then best head to Europe in May.

COLD CAVE on tour in May :

MISSION OF BURMA also on tour in May :

THE NEW PORNOGRAPHERS holidaying in May :

TED LEO AND THE PHARMACISTS busking throughout May :

TIMES NEW VIKING back to party in May :

Don't forget, there's also the previously announced Dead Meadow European May dates and the Pavement reunion shows also in May.  Harlem May/June dates will be on the way too.  Mark your diaries. Photo used without permission, taken from Christoph!'s photostream on Flickr

There's a whole host of Yo La action to update you with this week. Tonight, the band will be speaking to Gideon Coe live on BBC 6 Music, show starting at 9pm.  You can listen live via DAB digital radio, or log onto Gideon's 6Music page here for a live stream.  The band will be discussing Popular Songs, their career and playing some of their favourite tracks from their most loved artists.

And tomorrow, at 7pm, Yo La Tengo will be playing a rare instore show, Freewheeling style, at London's Rough Trade East store.  It's a free show, but you'll only get in with a wristband.  WRISTBAND COLLECTION 1 HOUR PRIOR TO STAGE TIME, STRICTLY ONE PER PERSON.  So get down to the store early to guarantee entry.

Rough Trade East can be found :

The band will also be playing this weekend's All Tomorrow's Parties Nightmare Before Christmas festival at Butlins, Minehead.

As well as YLT, you can also catch Sonic Youth and Fucked Up down at ATP.  Check the ATP listings for everyone else playing.

Following what will surely be an incredible performance at this year's ATP The Fans Strike Back in May, Matador's finest Shearwater will headline London's Union Chapel on May 12th.  With support from The Cave Singers, sure to be playing new material, this will be a Matador double not to be missed.

I love a good poster. 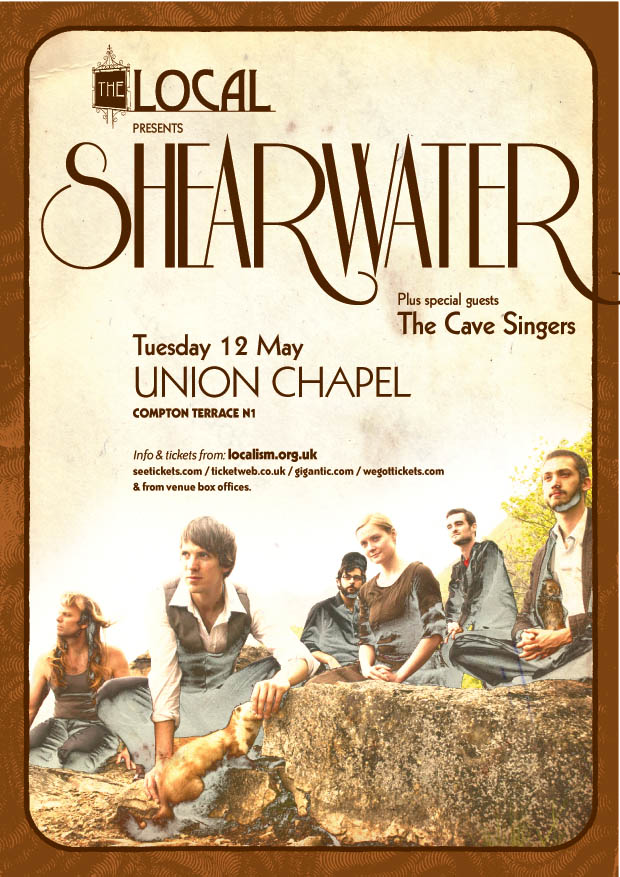 Down In Front Dept. - Times New Viking At ATP

Who amongst us has not wondering at one point or another, "what would it be like to watch Times New Viking from the inside of a hamster cage?".

Though the miracles of YouTube, this age-old mystery has finally been solved. Thank you, "ATP Rob", for your contributions to science, music and cinematography.

The Judge has already penned a candid account of the Jay Reatard/Times New Viking UK hostile takeover but for those of you who appreciate the odd band-in-action shot, here's some to float your boat....

These are all ATP-centric and not very good, mostly due to my inability to juggle a camera and various glasses of vodka and beer. On the upside, I would highly recommend watching both bands as an instant cure for those hangover cobwebs. 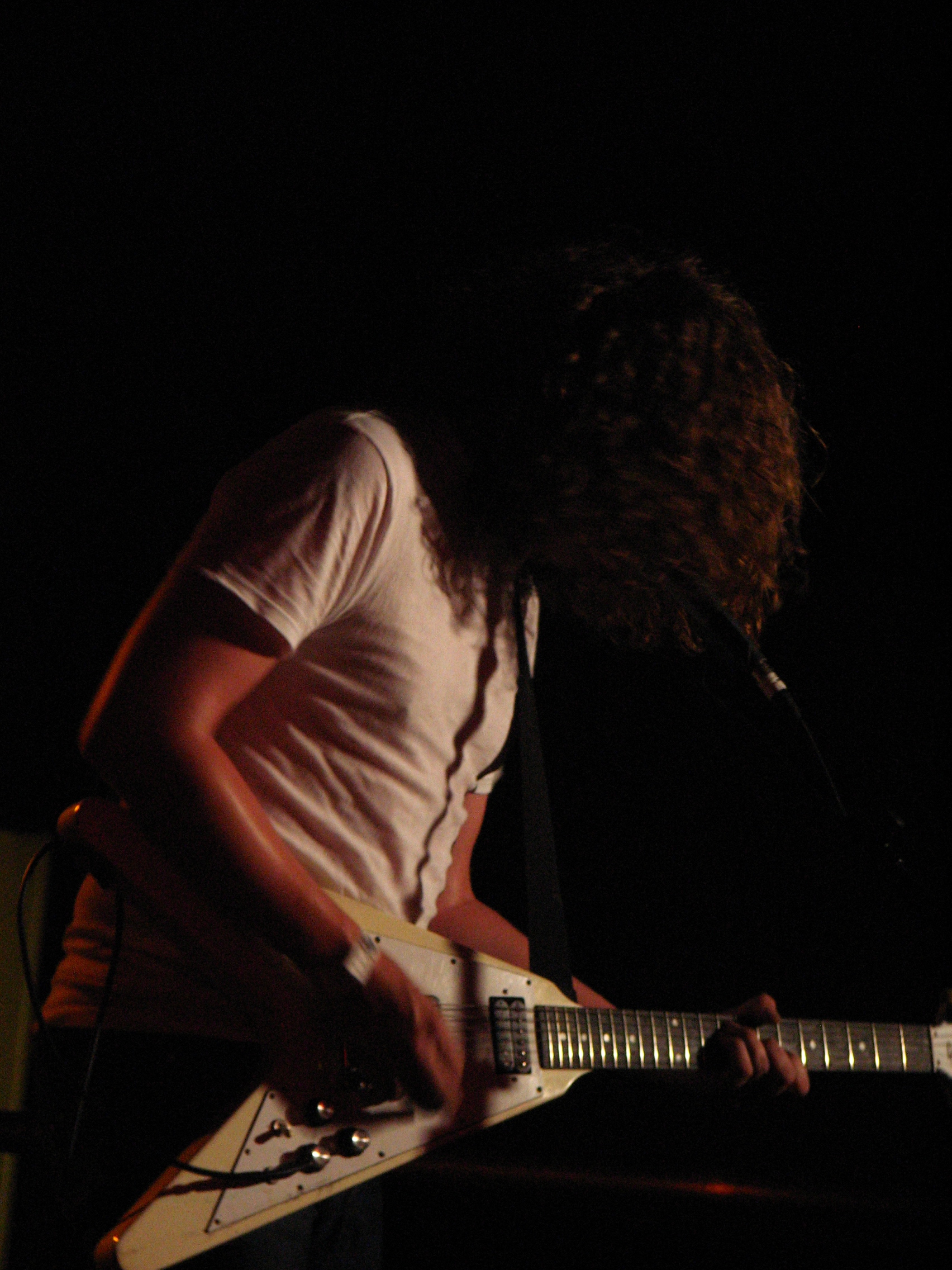 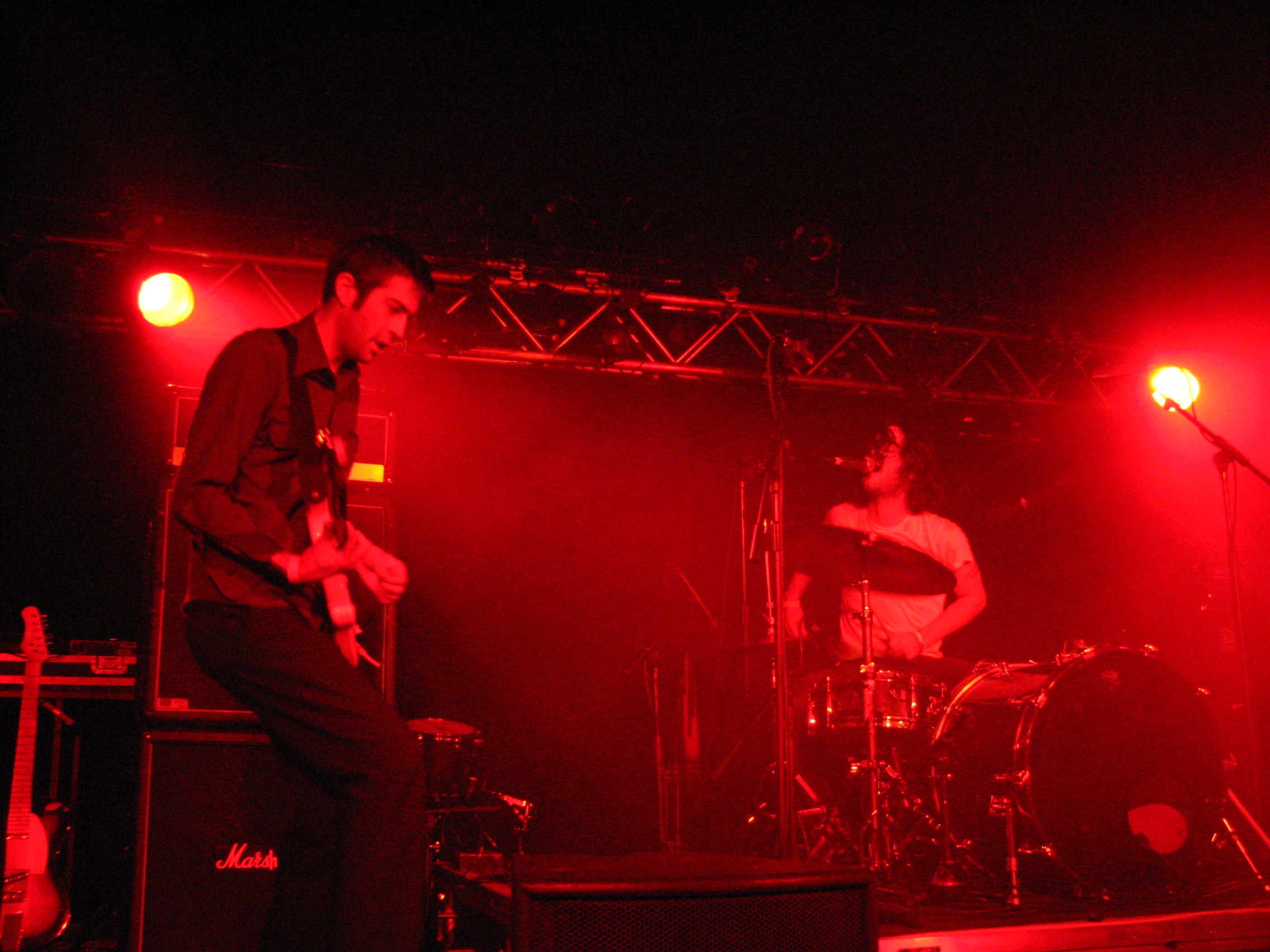 So we hit the ground running in London with Jay at the Old Blue Last and Times New Viking at Proud Galleries, before heading south at the weekend and back to the homeland of Camber Sands, ATP.

Jay, Billy and Stephen opened the festival with an intense 24 minute set. Billy made a new friend.

Times New Viking's dedications and shout outs brought a tear to the eye of every grown man in the room. English accents are being perfected this week by experiencing everything quintessentially English. 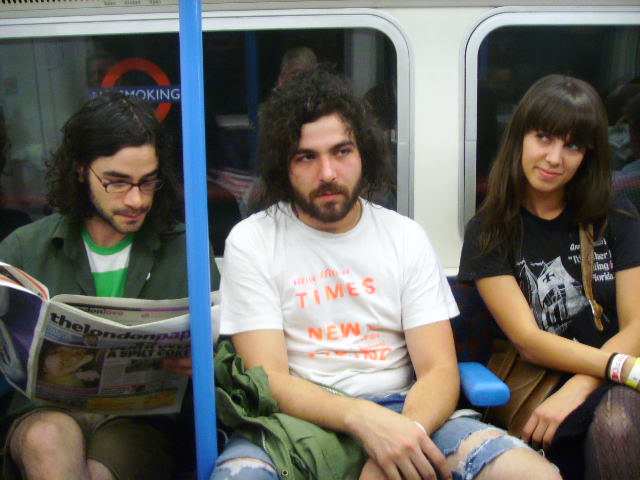 Full respect to Matt Psychedelic Horseshit (centre) who apart from working the sound magic on TNV, was smoking weed hard-core everyday with the Meat Puppets.

Our fresh faced troopers continue their take-over plan tonight at Bardens Boudoir in North London, and again tomorrow at the Old Blue Last as part of the Stag&Dagger festival. If you see this man on the street over the next few days, please give him a helping hand. I'd mentioned earlier that we were hoping to get some reports from Patrick and Natalie about how things are progressing for Jay Reatard and Times New Viking on their first dates in the UK.  Of course, I made this comment without remembering just how difficult it was to obtain an internet connection at Pontin's Holiday Camp, site of this weekend's All Tomorrow's Parties Festival.

That said, while we might have to wait another day or two for their field reports, I'm pleased to announce a mole deep within Barry Hogan's organization has leaked the following video from Day One.

For the record, I personally believe No Age have other songs besides a cover of "I Shot The Sheriff", but everyone is entitled to their own opinion.