This morning, Muzz release a new single/video from their forthcoming self-tiitled album, “?Knuckleduster?,” which follows the previously released “?Red Western Sky,?” “?Broken Tambourine,?” and “?Bad Feeling?.”  Brimming with wall-to-wall guitars, reverberating pianos and a thunderous performance from Matt Barrick, ”Knuckleduster” is Muzz at their most immersive and grandiose. Shot below the American Treasure Tour Museum, t?he “Knuckleduster” video brings the focus to the song’s spacious sonics and musicianship of Barrick, Paul Banks and Josh Kaufman. “?While we were shooting the video for ‘Red Western Sky,’ we discovered this great space underneath the museum. Unplanned, we quickly set up and started filming again - capturing the video for ‘Knuckleduster’ on the same day?,” says Banks. “H?air was greener and times were simpler back then.? ”

Today, we advance the cause of Matador’s Revisionist History series and the 25th anniversary reissue of Yo La Tengo’s 'Electr-o-pura' via a fresh look at the “Tom Courtenay” music video. Recently exhumed from our sub-basement storage facilities, this clip will today make its HQ premiere on Youtube.

Recollections are hazy, but we can say with certainty that the video was aired at least once on MTV’s 120 Minutes. After that, who knows? Maybe you saw it on a 5th generation VHS bootleg. Maybe you squinted through a greatly bit-reduced version using RealPlayer. Well, squint no more! “Tom Courtenay” is now available to stream in crisp, clear, and glorious high definition.

The video is accompanied by a brand new interview, where Yo La Tengo’s Ira Kaplan, Georgia Hubley, and James McNew reflect on the film’s creation alongside director Phil Morrison ("Junebug"), who also helmed the much-loved YLT classics, “Sugarcube” (1997) and “I’ll Be Around” (2013).

Out this fall via Matador’s Revisionist History series, 'Electr-o-pura' remains one of the most beloved works in Ira, Georgia and James' catalog. Now in a gatefold sleeve and cut from the original 58-minute master, the new reissue is pressed for the first time on two LPs to ensure the highest quality of audio the album has had on vinyl to date.

Video: "If You Run" & "Move Together" - Desert Sessions & NYFA Collaboration

Joshua Homme’s Desert Sessions collective is proud to unveil the first fruits of its expansion into visual collaboration: Homme’s recent meetings with students at the New York Film Academy’s Los Angeles campus have resulted in unique works by two filmmakers, each of whom was given a production budget to translate the music and lyrics of the Desert Sessions into their own vision.

Italian filmmaker Gabriele Fabbro took on the acoustic ballad “If You Run,” creating a haunting exploration of violence told through the eyes of a curious young woman, specifically inspired by deadly attacks on European journalists. “I used to read a lot of news about murders, especially on European newspapers. I remember one in particular that happened in a cornfield. That article came to mind while hearing ‘If You Run.’” The filmmaker said in a statement, “With this music video I want to touch themes such as ‘femicide’, ‘chase for justice’, ‘innocent curiosity vs violence’. But on top, I want to play with an existential fear. The fear of being powerless. Every tool in the video, from the shakiness of the handheld shots to the distorted sound of the radio, serves to exaggerate this fear.”

Filmmaker Jonathan Samukange employed a wholly different direction, reimagining Vols. 11 &12’s groove-heavy opener “Move Together” as the soundtrack to a psychedelic take on the story of Adam and Eve. In his statement on the video, Samukange says, “I wanted to create a seamless balance between computer graphics and reality. I want my audience to escape into a time capsule, following the tragic love story of Adam and Eve.” Filmed in the director’s home country of Zimbabwe, the video enlisted residents of an entire village and used the region’s stunning natural landscape to create the hallucinatory trip through time. “This idea is completely nuts, but it is also grounded in reality with themes of love, togetherness, collaboration, betrayal, and even brainwashing.”

After last week's at-home live recording of "Bad Feeling", Muzz preview another track from their forthcoming self-titled debut album in acoustic form, "Trinidad" with a DIY video released earlier today (below). 'Muzz', the resulting partnership of Paul Banks, Josh Kaufman and Matt Barrick, is out June 5.

Perfume Genius - "Without You" Video Contest

Perfume Genius is asking fans to submit music video ideas for "Without You", from the new album 'Set My Heart On Fire Immediately'. Mike has written about his inspirations for the song below and encourages interested fans to submit a creative treatment for the music video they would like to direct. Three fans will be selected as directors and each will receive up to $1,000 (depending on budget submitted) for the making of their video and $1,000 to be donated to the charity of their choice. Keep in mind videos should be shot indoors or outdoors respecting social distancing guidelines.

“’Without You’” is about a tiny moment of grace sustaining you through hard times. I looked in the mirror, which is usually such a jumble, and for a brief second i understood and liked what i saw. I didn't know that feeling was available to me. It left quickly, but it was enough just knowing it's in there somewhere hiding and waiting for me to figure all this out.”

Each director will have a video chat with Mike to discuss the song and video before getting started.

Submit your treatment with moodboard and budget (up to $1,000) via WeTransfer in the link below by Wednesday, June 3rd. The directors that Mike selects will be notified Wednesday, June 10th.

Out Today : Perfume Genius - 'Set My Heart On Fire Immediately'

The eagerly anticipated new album from Perfume Genius, 'Set My Heart On Fire Immediately' is available today via all streaming services, as well as on LP and CD.

At 5pm eastern today, Perfume Genius will be discussing and performing material from 'Set My Heart On Fire Immediately' on the premiere episode of Pitchfork's new Listening Club series. 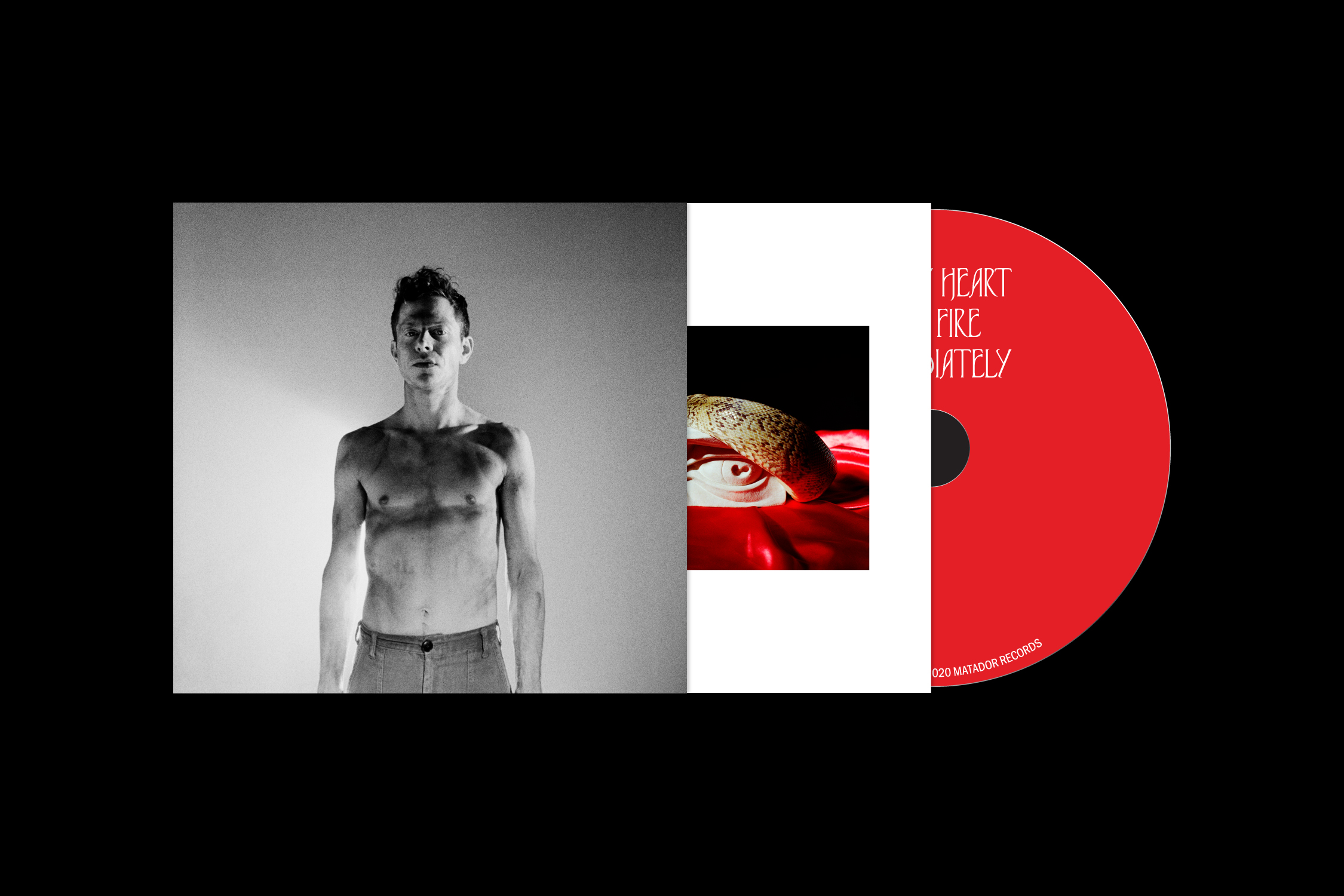 Leading up to the June 5th release of their self-titled, debut album, 'Muzz', the new project of Paul Banks (Interpol), Josh Kaufman (producer/multi-instrumentalist and one third of Bonny Light Horseman), and Matt Barrick (drummer of Jonathan Fire*Eater andThe Walkmen), release their first-ever live recording - a performance of “Bad Feeling.” For the video, the trio play from the cities where they’re currently staying home - Banks in Edinburgh, Kaufman in Brooklyn, and Barrick in Philadelphia. Using the available resources in their respective residences, the stripped-down performance can be seen above. The studio version of "Bad Feeling" can be found on 'Muzz', available via all digital services and on LP and CD.

The long-awaited new album from Car Seat Headrest, 'Making A Door Less Open' is available today from all streaming services and can be purchased on the still surviving, if not entirely thriving LP and CD formats (track listings below).