In addition to the aforementioned European dates, Iceage will return to New York for a two-night stand at Brooklyn's Acheron. These dates follow Iceage's appearances at San Francisco's Rickshaw Shop and the Culture Collide & Corona Capital festivals. New dates in bold

A pair of shows were added to Savages' September North American itinerary earlier today ; ticketing links are below, and both shows go on sales this Friday, August 2.

Iceage back in Europe

Having toured long and hard across North America this year, Iceage return home for shows across Denmark during a larger European tour.

As it's been a minute since they last played in Europe, here's a reminder of what to expect from their live show, in the form of 'Morals', shot in New York back in January.

So you mean to tell me that Come - with original lineup of Thalia Zedek, Chris Brokaw, Arthur Johnson and Sean O’Brien - are playing a free, all ages instore the night of the final show on their US tour in Atlanta at the famed Criminal Records.

And while you're there, be absolutely fucking sure that you pick up a copy of the reissue of "one of the best rock albums of all time."

You'll probably be treated to at least one version of " Submerge"

New additions from Matador have been announced for Pitchfork's Parisian Takeover in November.  Savages and Majical Cloudz join the previously announced Yo La Tengo and Iceage for the three day event at the Grande Halle De La Villette on October 31st - November 2nd.

Full lineup of artists will soon be updated HERE. 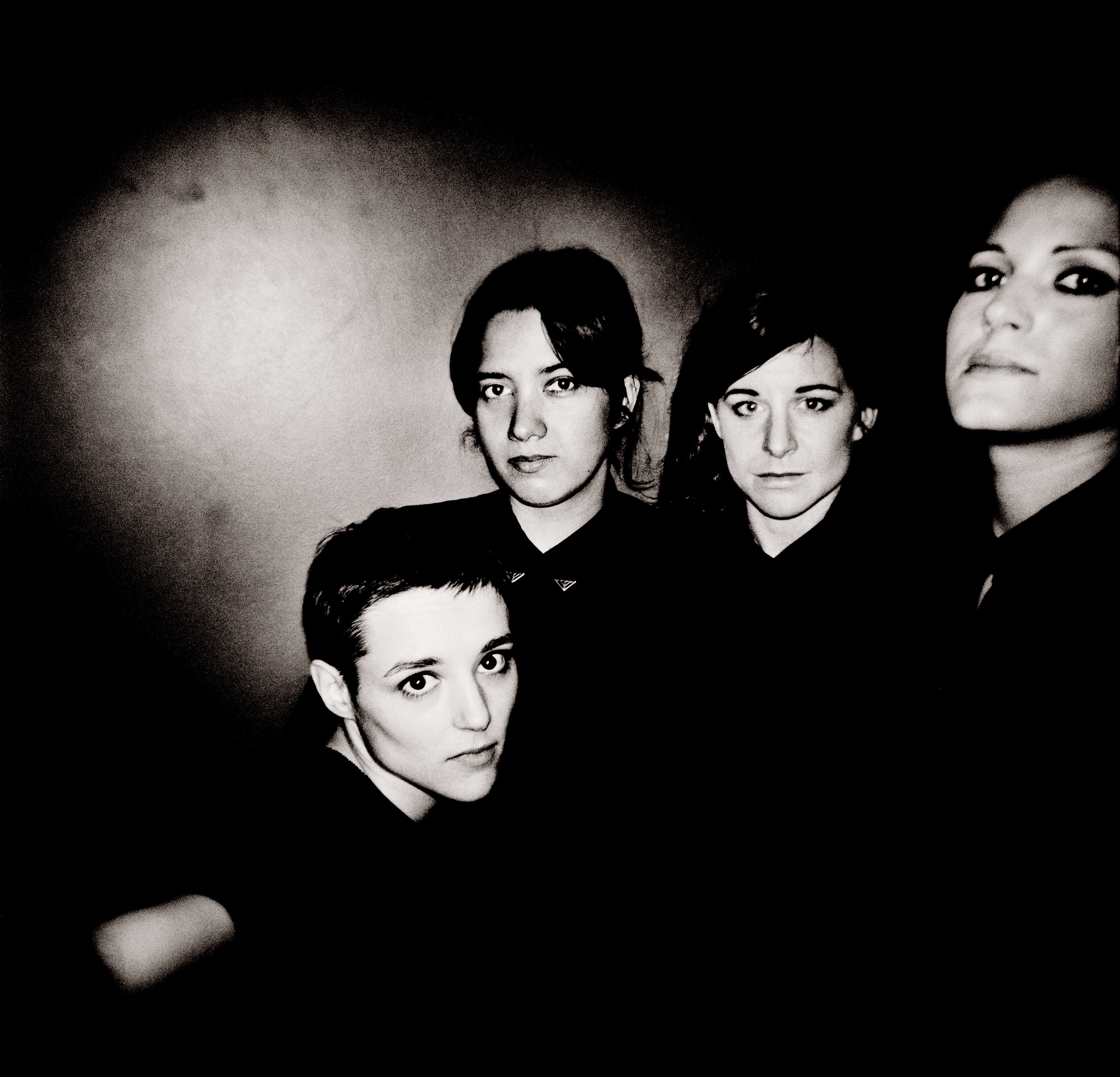 Hey Twin Cities, were you doing something last night that caused you to miss out on seeing the band that pretty much owned Pitchfork Festival? Well stop kicking yourself, Sally, because if you listen to The Current tonight at 8:00PM EDT/7:00PM CDT, you can get a taste of what you missed when Jehnny, Gemma, Ayse & Fay rip through what is sure to be a blistering set of songs. Listen at 89.3FM in Minneapolis/St. Paul or online at thecurrent.org.

If you, on the other hand, are the sort who prefers his or her blisters to be a little earlier in the day, you'll want to give a listen to KCRW's Morning Becomes Eclectic tomorrow, where Savages will be going live at 2:15PM EDT/11:15AM PDT in advance of their two sold out shows at the El Rey. Tune in at 89.9FM or kcrw.com.

Your next chances to catch Savages live in the U.S. are below:

*- specific date/time of Savages’ appearance will be announced soon.

Savages
Pop Noire
order ‘Silence Yourself’ from The Matador Store

New Lee Ranaldo and The Dust Tour Dates; Album Due In October Lee Ranaldo and The Dust will be touring the US and Canada this fall and winter in support of a new album to be released in October, the followup to 2012's Between The Times and The Tides. The album will technically be the debut release from Lee Ranaldo and The Dust [Alan Licht, Steve Shelley, Tim Luntzel], reflecting its more band-oriented approach and sound. The first round of dates is below, more dates coming soon (including UK/Europe), and full album details will be released in August.

All US dates on sale this Friday, July 26. 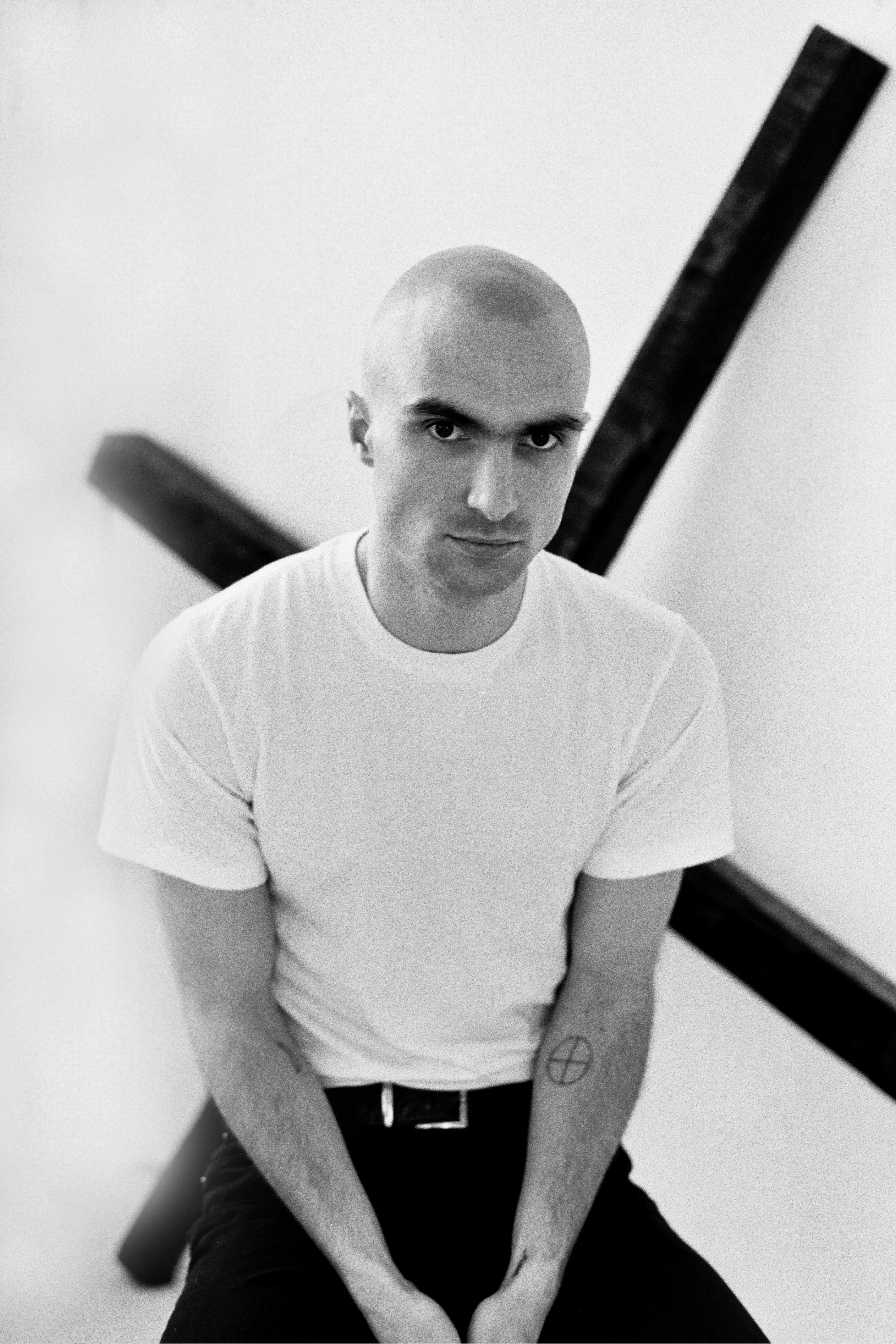 As seen in these pages previously, Devon Welsh and Matthew Otto, the duo professionally known as Majical Cloudz, are in the midst of a West Coast instore tour that takes them to Los Angeles's Origami Vinyl today. What we haven't told you until now is that Majical Cloudz will also be paying a visit to KCRW this morning to appear on Morning Becomes Eclectic at 11:15AM. So really, you can't lose, LA: listen to them on the radio, or see them at the instore...hell, do both! All you have to do to accomplish the former is turn your radio dial to 89.9FM in LA, or if you're not in LA (or don't have a radio), listen online at KCRW.com. KV in the studio at The Current in March. Photo courtesy of The Current (MPR / Jennifer Simonson)

Turn up the AC and tune in to WNRN today at 4pm EST to catch a live solo in-studio performance from Mr. Kurt Vile.

You can listen online right here or download the WNRN app for your iPhone, iPad, etc…
And of course if you're in the Charlottesville, VA area, tune the radio to 91.9.

Kurt will be taking to the airwaves ahead of tonight's show with The Violators at the Jefferson Theatre. Tix here.

Tour Dates here
Wakin On A Pretty Daze on the Matador Store
www.kurtvile.com

Double KV trouble today in Asheville. Swing by Harvest Records today at 4pm to check out Kurt Vile's free solo instore performance. And, of course, make sure you get yourself out to The Grey Eagle tonight to see Kurt live with The Violators. Grab tickets now before they're gone. 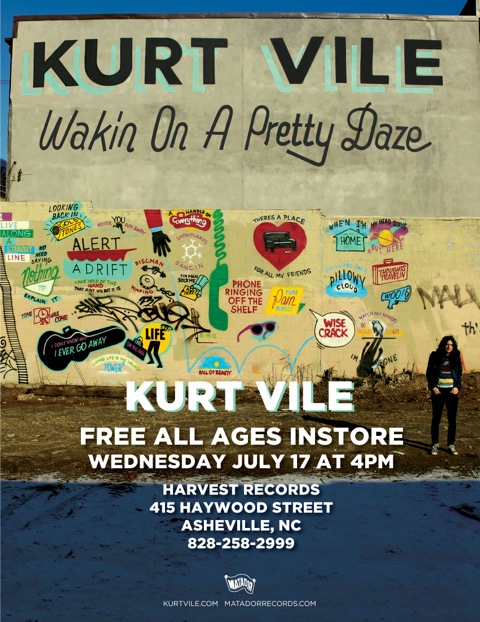 Kurt Vile & The Violators On Tour:

Wakin On A Pretty Daze on the Matador Store
www.kurtvile.com

Body/Head, Kim Gordon and Bill Nace's improvisatory guitar duo, are playing several dates this fall in support of their Matador debut album, Coming Apart, available for pre-order HERE. The first batch are below, but watch this space for more fall dates at unexpected venues and events.

As previously announced, Coming Apart is out on Matador Sep 10 (Sep 16 in UK/Europe).

Additionally, Bill Nace will be playing the following shows:

Check out some of Bill's other projects at his Open Mouth Records.

Kim Gordon will also have an exhibition of her visual art, Design Office Since 1980, opening at White Columns gallery in New York on September 7 and running through October 19. 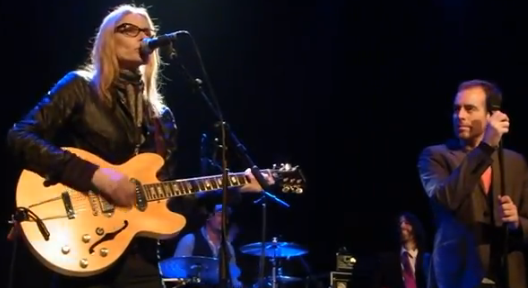 (above : Aimee and Ted, Cologne, January 2013. Though the shows below will feature separate sets, there's no law on the books preventing the pair from playing together at some point if they so choose)

I added half a fresh jalapeno, helped out our still somewhat pallid NYC tomatoes with some San Marzano juice, and omitted his elaborate garnish, substituting a slice of avocado. I like some chunkiness & pulp, so didn't bother to strain. His tips for tasting at key steps are essential.

File Under: Last minute news but you're super stoked if you live in Nashville.

Check him out when you're wondering, "What am I gonna do today?" on Sunday.

And after this jawn wraps, be sure to catch Mr. Vile and his Violators at the Mercy Lounge that evening.

Belle and Sebastian played a beautiful set last night at Celebrate Brooklyn! in Prospect Park. Included in this set was a fantastic live version of "Your Cover's Blown". Speaking of which, you can check out the Miaoux Miaoux Remix of that song right here.

This remix is also on the August 27 release of The Third Eye Centre a compilation of remixes and non-LP Belle and Sebastian tracks from the past decade. Check out some of the gorgeous packaging below. All formats (CD, standard LP, deluxe LP) can now be pre-ordered on the Matador Store. And to those first 100 folks who pre-order the deluxe LP, you'll receive a free Belle and Sebastian autographed poster that features exclusive artwork. So get on that pre-ordering! (update: the 100 posters w/ deluxe LP  are now sold out). 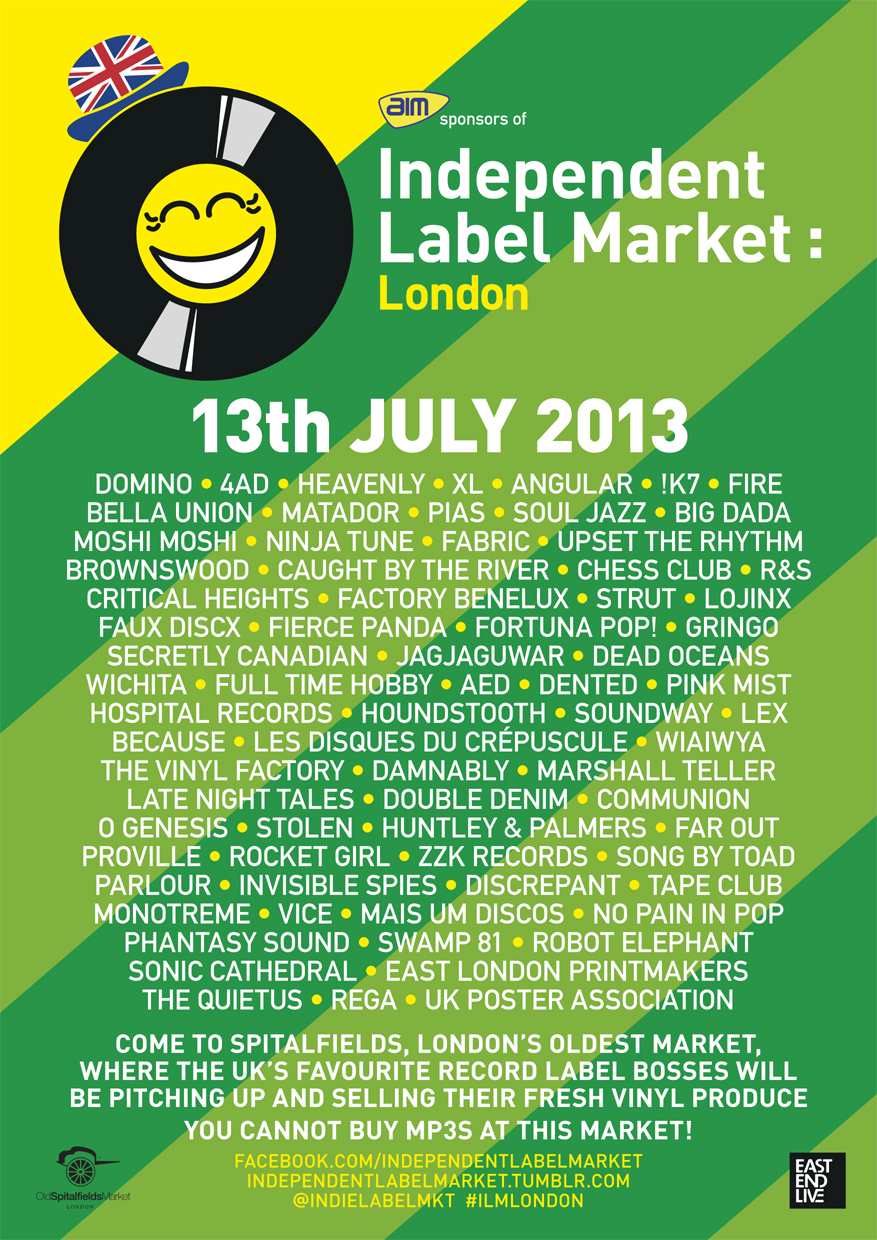 If you're around London's east end tomorrow, Matador's UK label staff (there's only 3 of us y'know) will be selling goodies down at the annual Independent Label Market.  Alongside all our latest releases, you'll find some rare old greats, out of print 7"s, signed posters, cakes, flags, badges, tote bags, tshirts and much much more.

Join us baking in the sun alongside our friends at Domino, 4AD and Bella Union and our enemies at XL, Secretly Canadian and Wichita.  JUST KIDDING GUYS. xoxoxo

We already know how special a Majical Cloudz instore performance can be, right?

Well lucky you, out west-ers because in a few short weeks, Majical Cloudz are taking their intimate show to one of the most intimate settings of all; the free all-ages instore.

The band will be hitting four of our favorite California independent retailers on their way up the coast from San Diego to Santa Rosa. Details below.

In the meantime, check out this new video for 'Bugs Don't Buzz.'

While Yo La Tengo continue their global touring in support of what's likely to be considered one of 2013's top albums, 'Fade', we'd like you to STOP WHATEVER YOU'RE DOING right this moment and focus intently on the album's first song.

The second video from 'Fade', "Ohm" was written and directed by Donick Cary, with animation created by Sugarshack Animation, and was produced by Dejda Mishkovsky. Fans of "The Simpsons" might recall Cary's writing credits from such episodes as "D'ohing In The Wind", "Thirty Minutes Over Tokyo" and "The Last Temptation Of Krust". Apparently they still give awards for music videos and after watching "Ohm" multiple times, I'm sure you'll agree it's a good thing the band invested in an extra large trophy cabinet.

(NOTE TO OUR FRIENDS IN GERMANY : if by some chance the YouTube version of the above clip is blocked, try here instead) We're releasing a limited edition triple 12" set of multiple versions of "Ohm" ; 3 12" singles with a printed flat in a 4-box poly shower curtain display case. There's metal grommets in the curtain if you'd prefer to display it on your wall (or, if you're especially nuts, in your shower).

All versions are unreleased except the original version. Each 12" pack comes with a download coupon with all the tracks plus the radio edit of "Ohm".

We'll be selling the "Ohm" 12" triple pack early at the Matador table during the CHIRP Record Fair at the Pitchfork Music Festival in Chicago's Union Park, starting Friday afternoon, July 19. However, you can preorder The "Ohm" 3X12" from The Matador Store today.. It'll be in finer record stores on Tuesday, July 30.

Yo La Tengo's schedule of live appearances can be found after the jump :