A.C. Newman and band are set to bring rollicking live renditions of Get Guilty's finest as well as some trademark charm to Terre T's Cherry Blossom Clinic this Saturday, January 31 at 3PM EST.

WFMU can be found on the radio dial at 91.1 FM (NYC/East Central NJ) and on WXHD, 90.1 fm (Hudson Valley, Lower Catskills, Western NJ) and as always, online.  If you miss it, the performance and interview will be archived over at WFMU.org.

To say that we were impressed with this contest would be an understatement.  The entries ranged from nü american gothic weird to recycled internet meme.

At the end of the day, Stuart said it came to this:

"once the group realised beans was in fact represented (as a mosquito at the back) they gave him the prize!"

So, without further adooo...  congratulations Colocho from France. (yes, he is a true artist...only one name)

Upon hearing of his good fortune (and enduring a GITMO-esque indemnification process to prove he was indeed the creator of this original piece of art), Colocho exclaimed:

We have consulted our French to English translator site and we are pretty sure we don't see "remuneration" anywhere in that message.

Click here for a gallery of the finalists.  You all get the Matador B&S discography on CD.

Stay tuned for information on when these limited edition CDs will be on shelves. Anna Ives is the very young, very adorable daughter of Zac and Amy Ives. Zac is co-owner of Goner Records, the singer for Final Solutions, and a flat-out great guy. The Goner Records BBS is currently holding an auction while Zac, Amy, and Anna are in Boston, where the latter is receiving specialized radiation treatment. The auction is to help offset the Ives' mounting hospital bills. I'm here to encourage Matablog readers to either bid on some of the great finds that have made it to the block, and to offer their own donated items for auction. All of the needed information, including Anna's story, can be found HERE.

The auction can be found HERE.

Additional questions not answered by those links can be directed to Eric Friedl: [email protected]

Tonight At The Blender Theatre - Marcellus Hall & The Hostages

If you're looking for the proper way to observe Chris Lombardi's birthday (rather than say, sending Chris a very lavish gift and/or cash) you might consider former Railroad Jerk/White Hassle frontman Marcellus Hall's new band. They're playing tonight at the Blender Theatre --- perhaps the most prestigious auditorium named after a rock magazine since the closing of the Metal Hammer Centre For The Performing Arts. I won't be there, so tell me how it went.

My trip to Mykonos

With apologies to Pedro Almodovar. 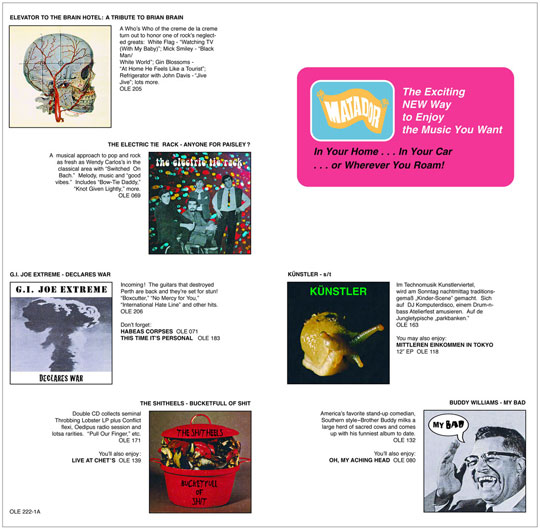 Here are both sides of a label catalog that was published on LP innersleeves in our early days. Click on the images to see a larger and more readable version.

Fucked Up - A&gt;D&gt;D Live Set; file under So Rad

Filmed and and recorded in glorious analog truth, Pitchfork TV debuts it's latest series "A>D>D" with Fucked Up, who brought the heat just hours after playing for some 12 hours in NYC.

Here is "Son the Father" and go to Pitchfork.tv for "Black Albino Bones" and "Twice Born"

Tour dates below the vid. 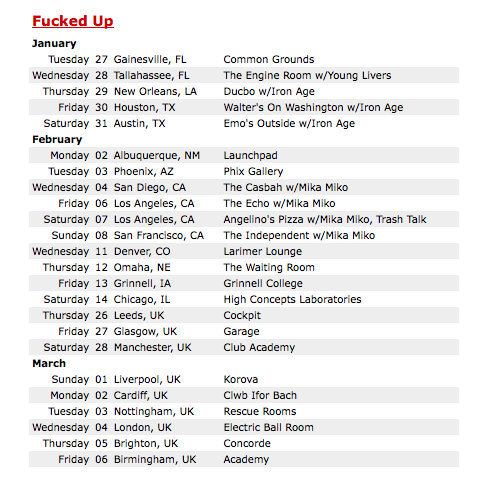 (Sonic Youth's) Thurston Moore and scandanavian saxophone demon Mats Gustafsson are playing the following shows together starting next week.  It's a big enough deal as is, but when you add a Cambridge date featuring a reunion of The Sickness (trunk of the Groinoids/Flesh Missles/Kil Slug/Upsidedowncross/Adolf Satan family tree --- eat my dust, Pete Frame!), you've got the makings of an historic event. 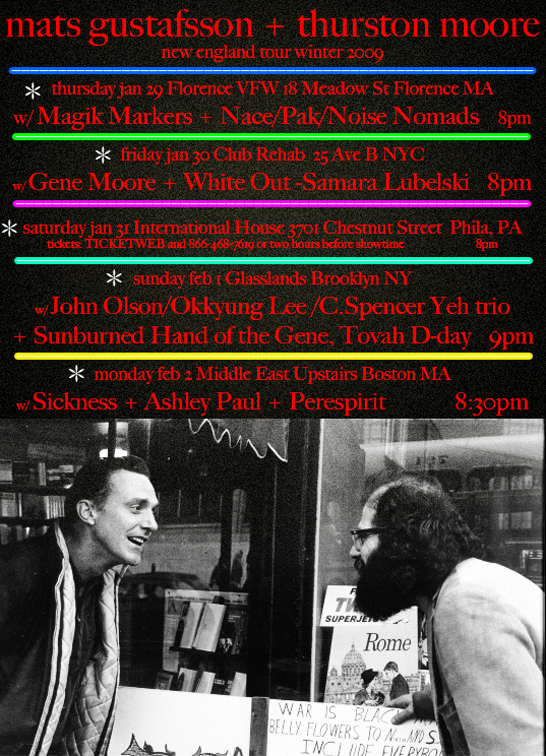 It may not be of the magnitude of a Saturday Night Live appearance but other bands from Seattle have big news of their own to announce as well. In this case it happens to be news from our favorite bearded, guitar strummers of the Northwest, the Cave Singers, so of course we want to share it with people far and wide. Or at least people on the West Coast of the United States via the Matablog.

Anyhow they've been enlisted to show Department of Eagles around the West Coast. We invite you stop by one of their shows starting this week. We can promise they won't make you sit through Rosario Dawson skits, that's a Matador guarantee!

*show without Dept of Eagles

Fucked Up live in-store the Lunchbox 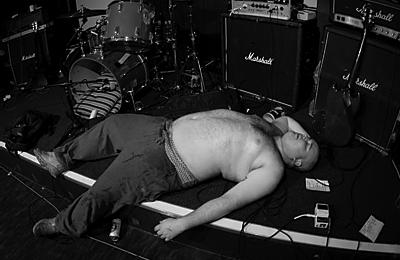 If you're around the Charlotte, NC area this Saturday, 1/24, be sure to stop in the Lunchbox and check out Fucked Up live in-store at 4pm. The band is stopping through during there current U.S. tour to help celebrate Lunchbox's three year anniversary.

The Lunchbox 1419-A Central Ave. Charlotte 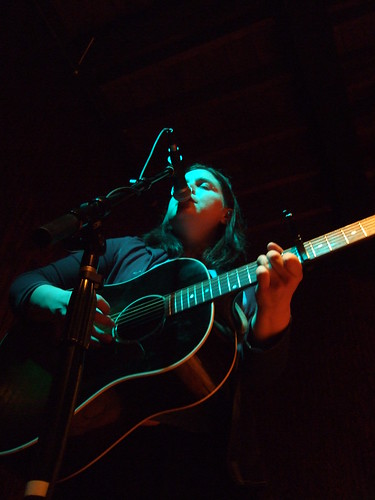 Taking a breath between gigs on her seemingly never-ending tour, Jennifer O'Connor and her band stop by Austin's KUT to perform a special live session. Austinites can hear it on Thursday (1/22) at 2PM on 90.5 FM, while the rest can stream from kut.org. The character in the center is not a Matador recording artist, but the gent on the far right most certainly is.  That's Pink Eyes from multi-time Juno Award winning beat combo Fucked Up, and he'll be adding his commentary skills to MTV's "Detox" tonight (Jan 21) at 11pm eastern.   A few hours later, the Toronto vocalist can be seen as a guest on Fox News' "Red Eye".

If you'd rather not watch TV, however, you can always drive to Philadelphia.  Here's the rest of Fucked Up's current North American tour :

(The Chemistry Of Common Life - LP/CD/digital album, available from The Matador Store) 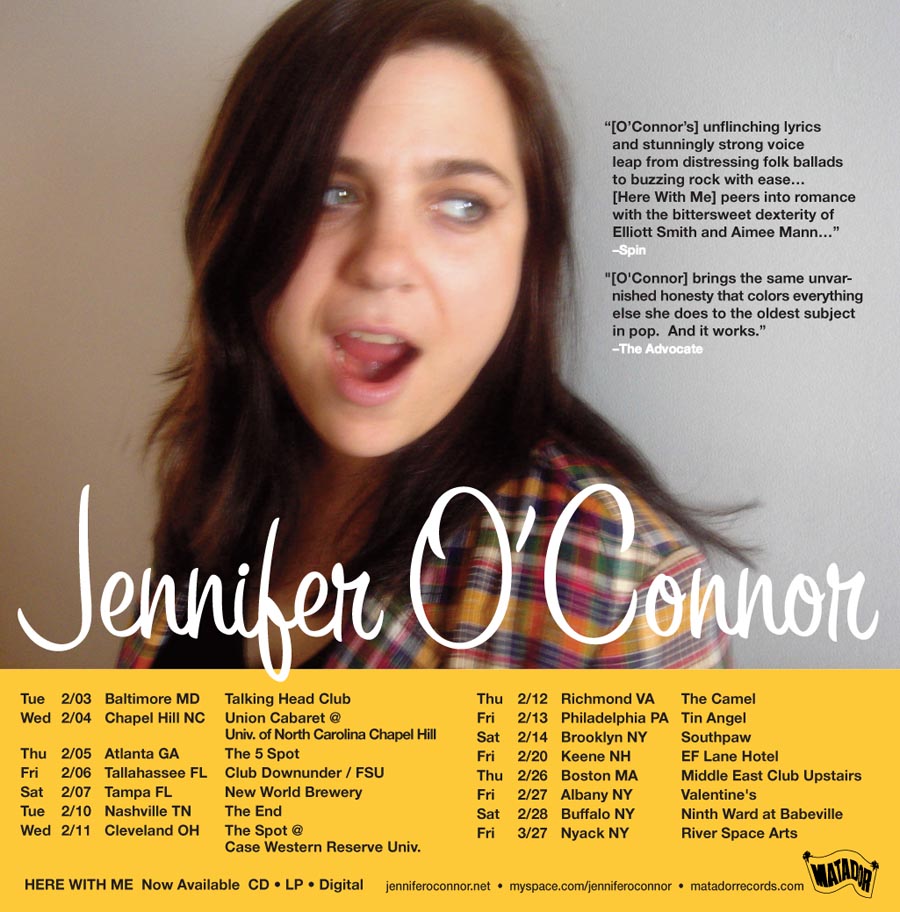 ...followed by February and March solo dates. If we don't see you at one or more of these, hopefully it's just the poor lighting.

Don't forget, kids...TONIGHT at the Virgin Megastore in Union Square, Carl and Co. will be playing an in-store to support Carl's new LP/CD Get Guilty. 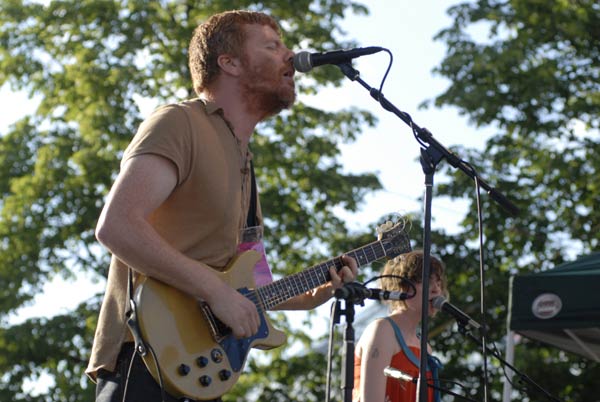 Until then, you can check out the video of "The Changeling (Get Guilty)," the second song from Carl's DUMBO sessions, posted today on stereogum.....

(J, Cody and Johnny wishing a GWB a fond farewell. Sort of.)

OK, a couple of club dates in the middle of some massive festival gigs on the NiN-headlined Soundwave clusterfück. If you're attending one of the latter, be sure to say hi...as it's gonna be a loooong day.

Remember that contest we ran over the holidays? The one where you could win every 7" in our Jay Reatard Singles Series plus an autographed copy of the Beck split? For most it was a minor waste of time- but one randomly selected person actually won this thing!

Congratulations to Matt Elliot of Newfoundland, Canada! Enjoy the records!

Here's my fave snippet from the interview :

Q : What is the best live act going right now? The popular answer seems to be My Morning Jacket, and I tend to agree.