You will need a wristband to get into the show. Writsbands will be available for pick up at Music Millennium's "east" location between 5:00 and 7:00 P.M. on the day of the show.

ALSO, wristbands will be available at the club at the normal door times. However, THIS SHOW IS FIRST COME FIRST SERVED, so get there early and stay in line.

It might've required a 6:30 am wakeup call for the band, but when it comes to entertaining the loyal listeners of America's most beloved morning radio program-that-doesn't-feature-Artie Lange, no sacrifice could be too great.  You can hear Cat Power in about an hour from now (say, 11am PST) on KCRW's "Morning Becomes Eclectic"

Matador's Jesper Eklow filmed the process of cutting the vinyl for the Mission Of Burma LPs at Sterling Sound from the original tapes. Featuring legendary mastering engineer George Marino, this is the first of several clips we'll be releasing on the subject.

I'll See Patrick's Randomness And Raise Him Something Specific

Family tree connections to The Fluid aside, the above single is the greatest thing that ever happened in the city of Denver other than the time Denny Neagle sang "Caught With The Meat In Your Mouth" at karaoke. Thanks to the folks at Smooch Records, it is now available on the popular compact disc format for a price everyone can afford.  Well, everyone except Denny.

If you're not as Syked as we are, please, keep it to yourself. Wanda will be Jay Leno's guest tonight at 11:30pm EST.

Random single from the collection The above is the first chapter in the "random single from the collection" series, which will be happening as long as I can annoy people with it. This one is, appropriately enough, an incredibly boring French-Japanese childrens-lounge music single from 1997, recommended me by Yasuharu Konishi at a store in Tokyo the year it came out. Maybe one day it will be cool.

What do you do with Sammy's leftovers? I'm sure many of you have grappled with this problem before. After eating (and drinking) at Sammy's Romanian Steakhouse, and you inevitably have some steak left over... how do you heat it up? Because no way that shit's gonna fit in a pan. (See above.) I ended up using aluminum foil in an inventive way. With a little Vouvray (ideally pronounced in the Cockney Wanker accent), steam it a bit, and yeah, it was pretty tasty. Especially served with the dry cauliflower recipe from central-northern Indian I've been promoting hereabouts. Support Sammy's, btw

Yo La Tengo's Continued Covers For Cash Campaign On WFMU, Sunday at 5pm 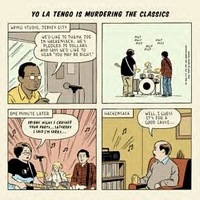 "From 5-8pm Gaylord Fields and Bob Brainen mark the halfway point of the WFMU fundraising Marathon by once again enlisting Yo La Tengo to take your calls, pledges and most importantly cover song requests, which will then be brought to life over the air! The band's long history with the WFMU Marathon has proven that Yo La Tengo is unstoppable, and tonight's show is a special longer 3-hour broadcast just in case that extended version of "Hocus Pocus" comes up. Gaylord co-hosts the rest of Bob's show from 8-9pm after the band packs up as well. "

If you're feeling like donating loot to the only non-profitable organization I've ever supported besides Father Bruce Ritter's "Mittens For Boys" campaign, here's where you can do so.

The whole of 'Real Emotional Trash' (LP/CD, coming March 4) can be heard at the Jicks' MySpace page. Please, someone befriend this band so they can get some decent looking people in their Top Whatever.

In addition, the dashing quartet pictured above will be performing in the following record shops next week : After Matador's '07 reissue of the critically acclaimed 'Palo Santo', we've been waiting & wondering about the next Shearwater full-length. We're happy to report the resulting LP/CD 'Rook', not only lives up to the ridiculously high standards set by its predecessor, but should well stand as an early album of the year candidate. Produced by Shearwater's Jonathan Meiburg
and recorded by Matthew Barnhart at Denton's Echo Lab this past November and December, 'Rook' is an extraordinarily original work ; only on a handful of occasions have we heard an album this powerful and so rich in detail, both musically and lyrically. Shearwater's knack for the epic is already well documented, but with all due respect to their prior efforts, the broad sweep of 'Rook''s 10 songs is like nothing else you're likely to experience in 2008.

We'll have more details about 'Rook' in the weeks ahead, but in the meantime, Shearwater have confirmed the following US dates in support of Clinic. 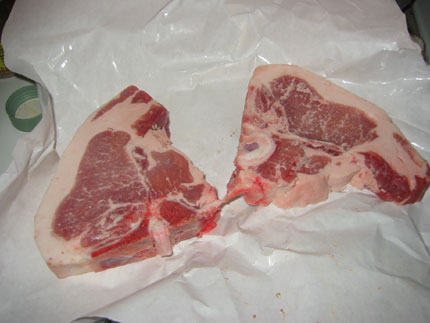 I recently wrote here about Ottomanelli on Bleecker Street, a great old-style New York butchers. They have the pork chops pictured above, a heritage breed from Western Massachusetts, 'black pig' Berkshires. This is what pork was like before it became the other white meat. Look at that fat. Liz Hart and I have recently been trading pork strategies for avoiding the overcooked phenomenon, a real danger with modern lean chops - you have maybe 30 seconds after it becomes done but before it becomes dry, and pulling it out during that window can be a matter of pure luck. (See my post about pork chops with vinegar peppers.) Liz recommends brining, and I tried that, with the good old Julia Child spice marinade, and it was great. But I found with these heritage chops, no brining was necessary... nor was there need for that constant worry about hitting the 30 second window. With these well-marbled chops, the fat provides the moisture. They were amazing. And they were also $7.99 a pound. I served 'em with steamed white rice (Carolina) and boiled green beans (a little bit of Lurpak butter and some salt).

While Jim DeRogatis will probably hit the roof tonight if "Juno" pulls an Oscar upset,  a recent online poll from Pearl & Dean of some 3000 cinephiles resulted in the following list of "films that should have won an Academy Award but never did."

The BBC site didn't reveal what came in 11th place, but there had to be at least a couple of votes for another neglected classic. 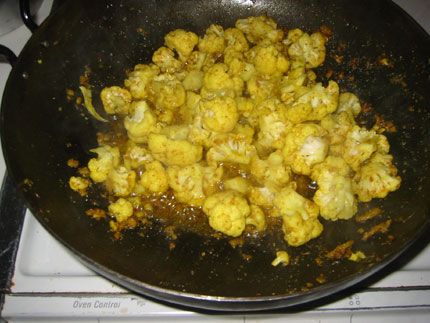 You always hear about Southern Indian vegetarian - at least in New York - you know, dosai, iddly, sambar etc. It's virtually been trademarked by the restaurants on lower Lexington who now all have rabbinical supervision and have gathered in the orthodox Jewish market. But of course vegetarianism exists all over India... the Vedic cookbook 'Lord Krishna's Cuisine' if anything focuses on the north.

The dish pictured above is evocatively called 'dry cauliflower' and comes from Uttar Pradesh, the north-central part of India. The cauliflower flowerets are flash-fried in oil that's been seasoned with whole spices, then steamed for about 5-10 minutes, covered, in the same pan, and finished with garam masala and amchoor (dried mango powder). The cauliflower is crisp and pungent, its own flavor still there but in contrast with the multiple spices and whole herbs from the cooking.

I served this with potatoes smothered with shallots, a southern recipe but one that almost could come from Pennsylvania or a similar northern state in the US. Potatoes are cut to thick old-style french-fry size and fried in butter (ghee); the shallots are fried in the remaining shortening; the potatoes come back and are steamed. The only condiments are salt and pepper (the prologue to the recipe says that green chilies are added in India, but I missed that, fortunately or unfortunately). The result was filling and plain; I liked it as a foil to the first dish. 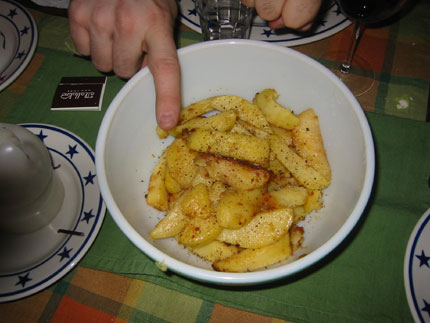 Breaking Down The Fourth Wall With Negative FX

snazzy, albeit brief video footage (above), in honor of Dave Bass' Distortions releasing 'Government War Plans'. OK, maybe it came out a while ago, but I just found a copy the other day.

As far the clip above, I recognize Dave Smalley and Jamie Sciarappa in the chorus line. Who knows? Maybe you're in there, too.

The final disc of the New Pornographers Buy Early Get Now promotion, the Challengers 'Executive Edition' box set, is now ready for download and burning.

You will get both videos ("Challengers" and "Myriad Harbour") along with tons and tons of photos: air-guitar-ing candids, set-lists, cover art mockups, and a massive collection of live photos.

For those of you who didn't get into this the first time, a limited number of Challengers box sets are still available:

Buy from the Matador Store

or from your favorite local retailer.

If you already have the regular edition of Challengers on CD or LP, you can upgrade to the box set - see the option in the Store above (or at your local retailer).

While we're smack in the middle of planning for the new Matmos LP/CD 'Supreme Ballon' (yesterday's marketing meeting was a doozy -- especially the pronounciation debate over "mobile"), Drew and Martin will be in New York this weekend, presenting two shows at The Stone (Avenue C and 2nd Street) on Saturday night at 8 and 10pm.

Matmos will be performing their version of Robert Ashley's 'Perfect Lives' along with additional material. Tickes are $10 (half price for students between the ages of 13 and 19) and are not available in advance.

Cleveland guitarist Jim Jones, a member of Pere Ubu from 1987-2002, and a player with bands including Home & Garden, The Mirrors, the Styrenes and the Easter Monkeys passed away on Monday evening. Jones was 57.

(an obituary from the Cleveland Plain Dealer's John Petkovic)

The joy of suet 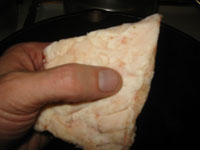 Just a quick plug for suet, which is the light, crumbly fat from around the kidney and liver. This piece came from O. Ottomanelli on Bleecker. It rendered easily and quickly and smelled delicious - I browned chuck for chili in it. Suet is not easy to find these days, at least in New York.

In addition to a European jaunt with Band Of Horses that starts tomorrow in Glasgow, The Cave Singers have confirmed the following shows in support of their Plug Award nominated 'Invitation Songs' LP/CD. The big rooms are w/ Death Cab, the small rooms, well, without Death Cab.  More summer festivals will be announced soon.