2) We'd like to congratulate Chan on 'Jukebox' entering the U.S. Billboard Album chart this week at #12 -- the highest placement for any Matador artist in our 19 year history.  'Jukebox' also zoomed into the Canadian charts at #3 --- again, the label's best showing in that lovely nation to date.

Mission Of Burma, performing "2twice" at last weekend's Benefit For Burma shows in Allston, MA. Video courtesy of the Boston Phoenix. Embeded video (with an annoying advertisement) after the jump.


Our Advice To The Candidates : Don't Stop Thinking About Tomorrow

Boing Boing reader Jeroen tells BB, "Hillary Clinton is using a controversial Golden Earring song in her campaign called "When The Lady Smiles." It is a great song, but I was wondering whether Hillary really know that in the video for that song a nun is raped, and the attacker's brain gets eaten by a dog."

Indeed, that's a messy situation for Senator Clinton. Though it might also shed light on the doomed candidacy of Dennis Kucinich, whose controversial use of Solger's "Raping Dead Nuns" was perhaps equally ill-advised?

From the ashes of two of the finest Seattle, nay, American, heck bands from the-planet- ever, Matador is very pleased to confirm the signing of JAGUAR LOVE to a long-term, worldwide deal. 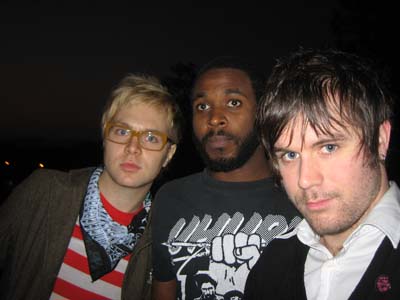 Consisting of Johnny Whitney (vocals, piano) and Cody Votolato (guitar, bass) --- both formerly of the Blood Brothers --- and our dear friend J Clark (drums, bass, keyboards, formerly the guitar wiz in the recently split Pretty Girls Make Graves), Jaguar Love bear some stylistic similarities to the trio's old outfits but based on early live evidence, something totally new & ferocious is in the works.  We're never quite sure where the art/punk/pop divide lies in 2008, but from what we've seen from Jaguar Love (both on their own and supporting Queens Of The Stoneage), we're also not sure it really matters that much, either.

The band are currently finishing their debut album at Seattle's Two Sticks Audio with J producing and engineering.  Much like everything else in life, the LP/CD's release date is to be determined but early Summer 2008 is certainly a possibility.

Jaguar Love will touring the globe this Summer and Autumn. Dead Meadow get got.

Another day, another attempt at making Thai food. Su-mei Yu is a serious taskmistress. I've now got the approved stone mortar and pestle (9 inches in diameter) and am pounding my pastes and chilis. Note: pounding, not grinding. You must do a simple up-and-down motion, constantly scraping the sides of the mortar, for 30 minutes, in order to achieve a smooth Big Four Paste. I have to say it is much smoother than I can achieve in my food processor. I can't imagine what my downstairs neighbors make of the rhythmic beat, however.

Keang gai faa is an older Thai dish. Similar to howling tiger - the emphasisis is on ground white peppercorn and cilantro rather than fiery green chilis or curry. Su-mei Yu translates it as "heavenly chicken stew" and this is more or less accurate.

Galloping horse, however, was the highlight of the meal (pictured above). It consists of ground pork fried with garlic, fish sauce, brown sugar and ground peanuts (I substituted ground cashews), which is then stuffed inside of fruit. Su-mei Yu recommend tangelos which, astonishingly, I was able to locate at the supermarket, but you can use figs, pineapple or persimmons. Tangelo segments are actually not easy to stuff with ground pork - Nils helped me - but getting the sweet-salty meat in the same bite as the citrusy fruit is all that matters. Each combination is topped with a cilantro leaf and a sliver of serrano chile. Unbelievable, and incredibly simple to make.

The Tape Of Only David Weave Roth 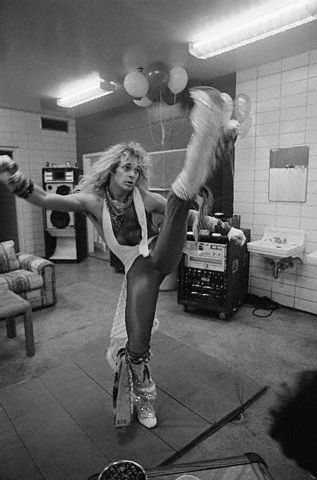 Apologies to The Loud Family for the above headline.  MP3 stolen from Chunklet.

Cat Power played a show in Paris on her birthday (Jan 21) at the famed  Parisian venue Bataclan. Tickets were changing hands outside for 200 Euros, that’s about 300 of your George Bush dollars. In a short but truly historic show Cat Power and Dirty Delta Blues managed to perform a set that ranged across heart rendering passion and through most human emotions including, but not ending in, jealousy and pain. The songs selected were mainly from the new Jukebox album. If Soul Music is passion, tenderness, longing and hurt wrapped up by a great voice and tight band then Cat Power and Dirty Delta Blues are Soul in capital letters and the performance of "Lost Someone" was a great example. "Silver Stallions", one of the highlights on the new album, unfurls with a mean slide guitar and taut solo from Judah Bauer. Together Dirty Delta Blues have matured into a muscular beast. They give the Bad Seeds a run for their money, delivering emphatic and repeated punches at the end of Metal Heart, a song that builds from a gentle beginning into a piledriver. The reworked "Metal Heart' underlines how good Chan's songwriting is, on par with any of the covered classics tonight. The version of "He's Got You" is beautiful but laden with vitriol as Chan stresses the word "you" with real venom live. The evening ended all too soon with Chan handing out white roses. Even the five minutes of the audience calling for more with full house lights on and music playing could not be satisfied due to a strict curfew.

The following day at the Canal Plus TV studios seven songs were recorded for broadcast. In those controlled situations, a small audience and state of the art studio the songs were even better than the Bataclan performance. Watch out for it on Youtube - I am sure it will pop up as soon as it is broadcast in France.

Cat Power & Dirty Delta Blues will be appearing on BBC2's "Later With Jools Holland" on Friday, February 1, as the show celebrates its 200th episode. Other guests that night include Dionne Warwick, Feist and Radiohead.

Sleeveface - Something Else You Can't Do Properly With A CD 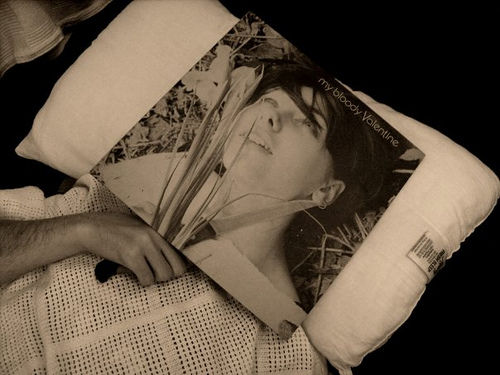 The slideshow function at the Sleeveface flickr page is highly recommended.  At least until you get to the shot of the Lard 12". Or perhaps that's where business picks up (as Jim Ross might say).

Bleachy And The .99 Cent Big Bufords Here is the fourth MP3 from the upcoming Earles & Jensen Present: Just Farr A Laugh double CD. It's entitled "Bleachy And The .99 Cent Big Bufords," and we'll let the track speak for itself:

Bleachy And The .99 Cent Big Bufords We're pretty close to dropping all sorts of enticing details about the forthcoming Shearwater LP/CD 'Rook', but for today at least, we'll merely let you know Jonathan Meiburg is supporting Bill Callahan in the following hamlets throughout the South and Southwest :

I'm sorry to be the one to break the following bit of bad news --- mostly because there's a ton of other people on the payroll and I oughta be taking fencing lessons or something --- but Matador's release of the forthcoming Earles & Jensen presentation 'Just Farr A Laugh, Vol. I & II' has been pushed back to April of this year. There have been a number of recent developments with the lavish packaging for this double CD masterpiece (apparently, retailers and environmentalists alike took a dim view of our plans to reintroduce the popular "longbox" configuration) , but our latest obstacle has appeared courtesy of Hawaiian attorney Peter Giftopolous (above).

Giftopolous, whom I will charitably describe as an ambulance chaser, has made himself available to persons who feel they've been personally or professionally demeaned, degraded or defamed by the contents of 'Just Farr A Laugh'. It would appear he's preparing for some sort of class-action suit against Matador, with the timing no doubt meant to coincide with the (hopefully high) Billboard chart entry of Cat Power's 'Jukebox' next week.

I think I speak for most of the Matablog's readers when I decry this sort of abuse of our legal system. Surely the founding fathers didn't have this kind of vulture-style behavior in mind when this country seceded from Canada. I can't say much more than that on the advice of Matador's own legal counsel, but rest assured the label is standing behind Andrew Earles and Jeff Jensen, 100%.

Unless this gets really expensive. In which case they're out on their ass, just like Liz Phair.

PED's Aside, Yo La Tengo Are Here To Talk About The Past

Much as I dislike the taint of anything sports-related here at Matador Records and Filmworks, I realize there are plenty of fans of  Yo La Tengo and rock history alike who might enjoy this video presentation.

NSFW. Unless you work at home or a piercing shop.  From the inexplicably delayed Earles & Jensen presentation 'Just Farr A Laugh, Vol. I & II'.

Our First Thought Upon Seeing The Zombie Karaoke Elvis-Bot? 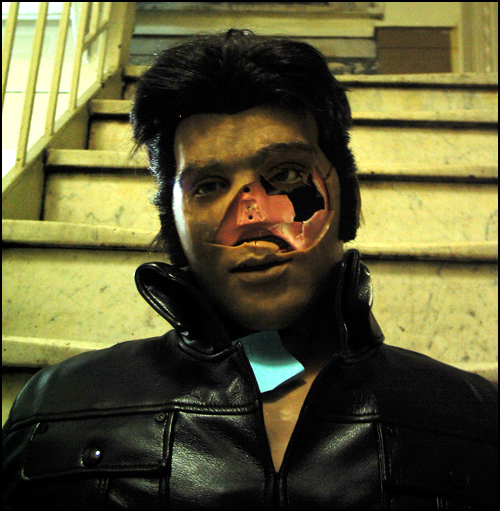 How do we get in touch with his lawyer or manager?

Not for the first or last time, the cunning camera crew at Legion Of Rock Stars has delivered the goods.

Dead Meadow Live At The Bowery Ballroom, In Pictures 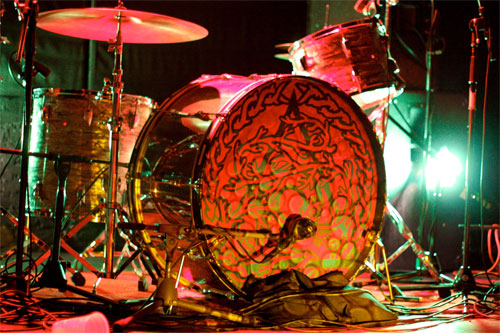 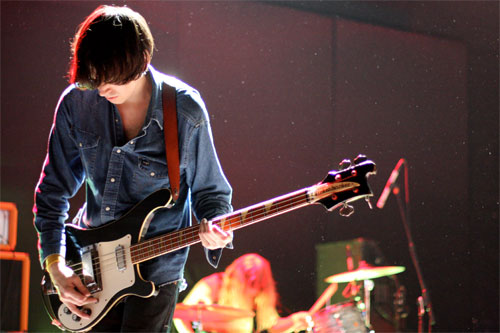 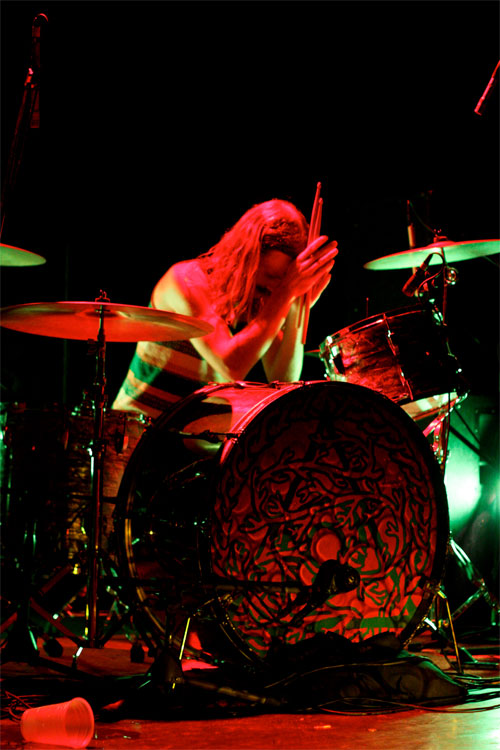 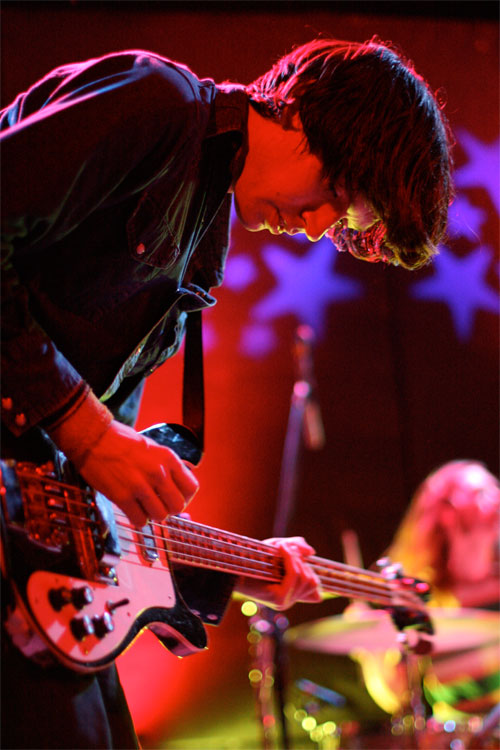 Preorder the Stephen Malkmus & The Jicks album 'Real Emotional Trash' (out March 4) now, and a get an instant stream along with two exclusive B-sides, an entire live show and a poster.

Visit the buyearlygetnow.com website to register. You start by preordering the album from a participating retailer - click the location on the map closest to you, or just order from the Matador Store - and you will get a username and password. Go back to buyearlygetnow.com to log in, download the stream, and get your extras on the site over the next few weeks.

On March 4 you pick up the album and poster from your local retailer or receive it in the mail. Simple and straightforward.