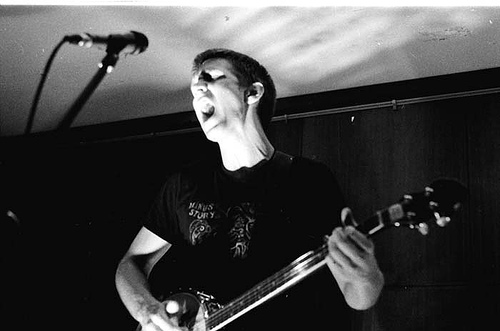 Shearwater vocalist/multi-instrumentalist Jonathan Meiburg will be performing tonight at a place so tiny, some of us are going on diets just for the occasion :

The New Pornographers' You Tube Challenge Gets A Bit Tougher

The Perfect Gift For The Mogwai Fan With Everything... ...unless he's got Martin's other old pacemaker.

Martin has in the last few hours come out of surgery fitting a new pacemaker. As happened last time we will have a charity auction for his old one with the proceeds going to the British Heart Foundation. Details will follow in the next few days. Get well soon Martin! - Stuart

Link taken from The Music Slut (hat tip to the non-slutty Adam Farrell).

Jesus Vs. Kathy G., No Mention Of The BBQ Sauce

From the Associated Press :

PIGEON FORGE, Tenn. (Sept. 20) - Members of a Christian theater troupe are spreading the word that they're irate about Kathy Griffin's off-color speech in accepting a creative arts Emmy earlier this month.

The Miracle Theater in Pigeon Forge spent $90,440 on a full-page advertisement in USA Today that ran nationally Monday, proclaiming "enough is enough."

In accepting the Emmy for her Bravo reality show, "My Life on the D-List," Griffin said that "a lot of people come up here and thank Jesus for this award. I want you to know that no one had less to do with this award than Jesus."

She went on to hold up her Emmy, make an off-color remark about Christ and proclaim, "This award is my god now!"

Not only were Ms. Griffin's remarks highly offensive, but I'm pretty sure they were word for word lifted from Stephen Malkmus' acceptance speech at the 2007 Plug Awards.

In the midst of a North American tour alongside Lavender Diamond and in support of album-of-the-year candidate 'Challengers', the New Pornographers will stop by KCRW tomorrow THURSDAY, SEPTEMBER 20 at 11:15 am pacific daylight time (2:15 pm for those toiling at 304 Hudson) for a live performance on "Morning Becomes Eclectic".

For those in or outside of the greater Los Angeles area, the show is available online via iTunes, Real Player or Windows Media. We should warn you, however, that all of the aforementioned applications require the use of a computer.

Canada's biggest phone company has apologized after a punk-rock reference to the Holocaust appeared on billboard advertisements for its cellphones.

The ads for Bell Canada's Solo discount service showed a young woman decked out in flashy punk rock attire, with a button that reads "Belsen was a gas" -- the controversial title of a song by the Sex Pistols, and a reference to Nazi Germany's Bergen-Belsen concentration camp.

"It was inadvertent," Bell Canada spokesman Mark Langton said on Friday, noting that the dozen ads were taken down as soon as the company realized its mistake. "Obviously, we would never depict such an offensive slogan in our advertising."

He said Bell officials approved the ads after examining sample images that were smaller than the final billboards. The button inscription could only be read when the ads were blown up to their full size, he said.

"In the proofing and approval materials, it was impossible to see the button, so our folks missed it."

Cell Freak helpfull points out most of the prisoners at Berger-Belsen "actually died after being beaten to death or from a Typhus epidemic in late 1944."   So I'm feeling better about Canada Bell already.

ACL 2007 - A Rather Desperate Attempt At Liveblogging

Though I've seen terrific sets thus far by MIA, LCD Soundsystem, Queens of The Stoneage and (most especially) our own Yo La Tengo, I'm happy to reveal a scoop so intense, not even the combined forces of Austinist, the Austin Chronicle or Statesman were on top of it.

When Saturday's headlining White Stripes cancelled on short notice, the promoters insisted there'd be no big name replacement flying in.

With another 5 hours to go, I'm happy to report they were just trying to throw you off the scent of greatness : 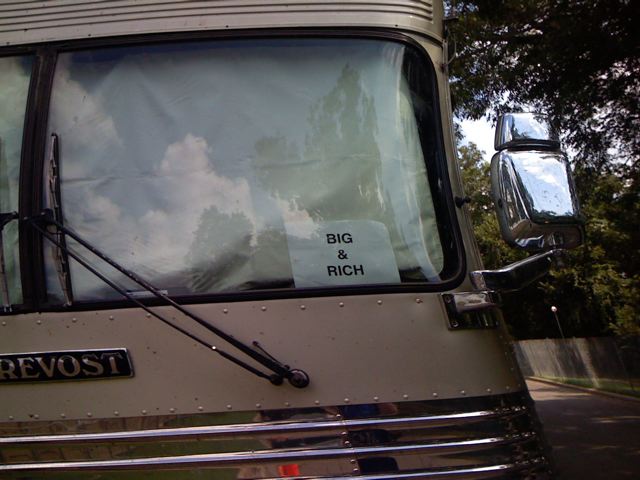 Just a word of warning to our Seattle constituents that newish Matador signing The Cave Singers will playing at Easy Street Records on Tuesday, September 25.  Said event coincides with the North American release of their amazing debut CD/LP, 'Invitation Songs', which funnily enough, is available now for preorder from the Matador Store.

Though we've also made a limited edition 7" of "Seeds Of Night" b/w the non album "After The First", analog-haters can absorb the former right here.

We (Still) Believe That Children Are The Future...

...however, that doesn't mean these tykes weren't way out of line when they told Tom Surgall to fuck off and made their own video instead. Video link from Popbitch (thanks to Natalie Judge for the heads up) The New Pornographers Vs. You : Consider Yourself Challenged

It's your big chance to win an iPhone. Or, if you're not into material goods, there's the healthy spirit of competition.

The New Pornographers return to Europe at the end of this month and going into early October, with new dates added since we last announced them:

Hey, at least someone had the guts to make a bold public statement. About something.

Residents of America's self-proclaimed live music capital might recall Yo La Tengo's Stubbs show with Times New Viking last April was rained out.  Realizing many of you were overcome with grief (I know I was), the band have graciously decided to go way overboard in making it up.

Next Sunday, Yo La Tengo will mount the main stage of the Austin City Limits Festival, kicking off a day and evening of music that should be remembered long after the mosquito bites have healed and the dust inhalation has subsided.  After their set, Ira, Georgia and James will submit to a fun-filled round of autograph scribbling underneath the Waterloo Records tent.

On Monday, after doing a session at KUT, Yo La Tengo will be hosting the Alamo Drafthouse's Cinema Under The Influence Series Vol. 3.  The band will introduce a screening of Dario Argento's "Four Flies On Grey Velvet", along with John & Faith Hubley's "Cockaboody".   The program starts at 7:30pm, and will take place at the Alamo's 1120 South Lamar location.

(If you bring a ticket stub from the above event to Austin's End Of An Ear, you're get a 15% discount on any item from the Matador Yo La Tengo catalog)

Finally, if you're shit out of luck and can't attend the sold out ACL Fest ---- or you'd prefer to see Yo La Tengo play a full set! ---- Yo La Tengo are making a rare mid-sized club appearance at  the Parish on Monday the 17th.  Tickets are available here, and support will be provided by The Black.

Did I say finally? As we should've mentioned a while back, Yo La Tengo are playing the Hollywood Bowl on September 29, sandwiched between Bright Eyes with The Los Angeles Philharmonic and M. Ward.

If You're In L.A. Looking For Action Tonight..

this no-longer secret "secret" show might be right up your alley. Kanye Does The Impossible... ....he's made it easy to root for 50 Cent in the countdown to next week's Soundscan.  The following quote is culled from Stereotyped :

“It’s like what if your drawbacks ended up being your superpower? I’ve always had an issue with masculinity. I’m like, ‘I hope this person isn’t looking at me like I’m a faggot ’cause I have some feminine ways.’ Maybe I’m not the guy who kicks off (a fight) in a club. Now I’m a 30-year-old, I’ve accepted that.

“Because of that I’ve ended up having the No.1 album.”

Before we all rush to judgement, I'm of the opinion the ever-cagey West is just engaging in some conceptual humor.  I seem to recall an almost identical quip, word for word, from Glenn Danzig when 'Black Aria II" entered the Billboard Classical Chart at no. 1 in 1992.

Drop The Chalupa (And Don't Pick It Back Up)

Slate's Mark Dery, author of "The Pyrotechnic Insanitarium: American Culture on the Brink", considers the pros and cons of the ptomaine hotbed venerable fast food chain Taco Bell while coming to terms with "the whiter, more monocultural society we were, versus the hyphenated nation we've become." 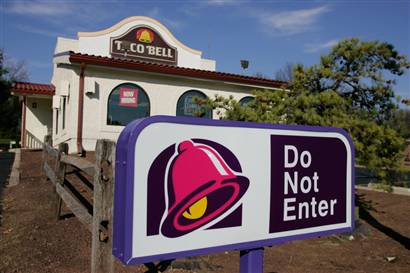 Most important, Glen Bell recontextualized the experience of eating Mexican food. In the gothic fantasies of white America, taquerias indifferent to the existence of dirt and grease served meat of uncertain origin and colon-scarring spiciness, calculated to exact Montezuma's revenge from whimpering, backfiring whites. Bell moved Mexican food to the right side of the tracks: Brightly lit and spotless as operating rooms, early Taco Bells were staffed and patronized exclusively by Anglos, at least in my experience. (Times have changed, apparently: SoCal-based Mexican-Americans interviewed for this story claimed that the sight of Latinos working and eating at Taco Bell is not at all uncommon.)

"At the time, Mexican restaurants were considered dirty," said the culinary historian Andrew F. Smith, in an e-mail interview. Raised in L.A. in the '60s, he recalled that "in racist Southern California, Mexicans and Mexican-Americans, then popularly known as greasers, were also considered dirty. Few suburban Anglo kids ate Mexican food until Taco Bell arrived. It sanitized 'Mexican' food (and in many ways, it also cleaned up the image of Mexican-Americans)."

But what's Taco Bell's reason for living in an America where public schools are adding mariachi to the music curriculum and huitlacoche is the new porcini? In the United States of 2007, Hispanics are now the nation's largest minority -- at 44.3 million, they make up 15 percent of the population -- and 64 percent of them are of Mexican origin. Who needs partial-birth cuisine like the Meximelt or the Crunchwrap Supreme when the real thing, in more and more American cities, is just a barrio away?

Farewell, maestro.  We promise to do justice to your collaboration with Times New Viking, just as soon as we clear all the samples.