Sonic Cathedral is a cool place to play and it feels right for the Ponys further onslaught across this city. The ceiling is crowded with yellow balloons with silver strings dangling onto the audiences heads. Nat who runs the club is DJing and shows some fine rocking selections. So do the Ponys. This band kick proverbial ass. They delve into "rocks rich tapestry" ( (c)Julie Burchill circa 1979) but come up weaving their own distinct and visceral sound. There is the sweeping grandeur of "1209 Seminary" and the stately beauty of  "Shine" balanced by the punchy future rock classic "Double Vision". The gig ended ends in a rock and roll maelstrom and yes indeed they "rock like a hurricane" ( (c) Sharon O'Connell circa 2007).  As they leave the stage Nat cues Television, a fitting salute to The Ponys' power and pedigree.

"The More Depressed You Look, The More Points You Earn" 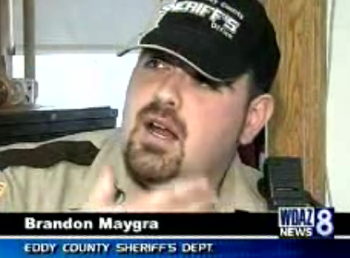 Once again, The Times' Sunday Styles section is brutally scooped.

The Shredding Of Sanrio

In what proved to be one of our worst kept secrets in recent memory, Matador is pleased to confirm that we've reached agreement on a longterm-ish pact with one of the nation's most wildly original bands, Shearwater of Austin, TX. 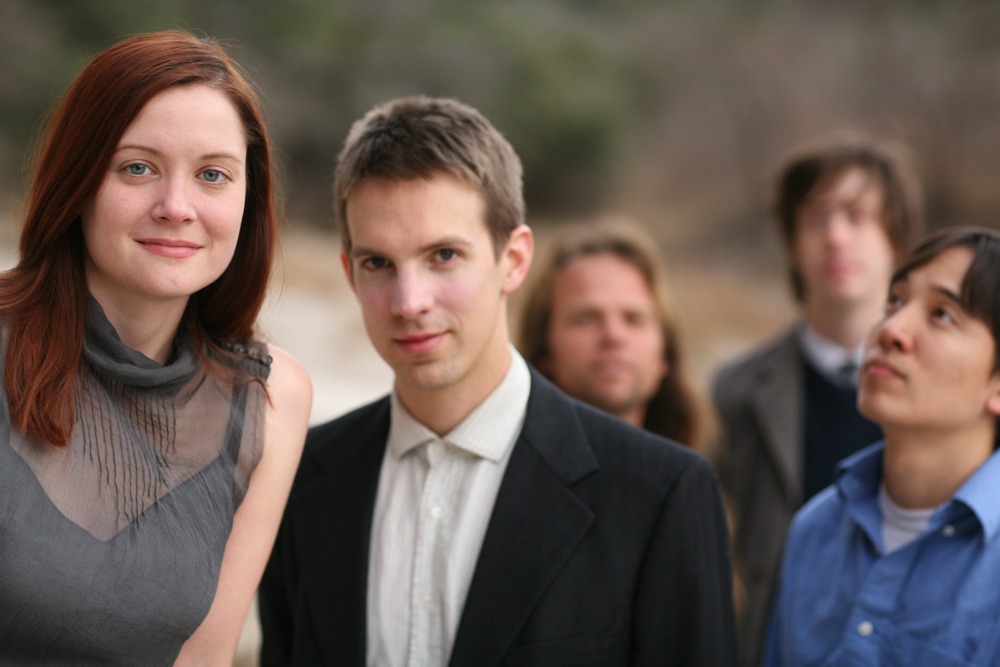 On April 10, we'll be releasing a new, double-disc (CD and LP) verison of Shearwater's 4th album, 'Palo Santo'. One of 2006's most critically acclaimed long-players is not merely being reissued, but is in fact, reimagined, with 5 re-recorded versions done in December 2006, along with all new art and remastering of the original tracks.   This expanded edition comes with an extra disc containing 8 tracks, some are demos of Palo Santo songs, some are previously unknown compositions, all adding up to a stunning companion piece to the album.

The album art has been given the deluxe treatment as well, and perhaps we'll even have a jpg to share later today. Impatient types can check out the new version of "Red Sea, Black Sea" (mp3) today.

If the gullible general public are willing to tolerate AC/DC without Bon Scott and the Dead Kennedys without Jello Biafra, what's the big deal about the Jam reforming....sans Paul Weller?   From the Guardian's Alexis Petridis.

Should you wish, you can see The Jam, with new vocalist Russell Hastings, performing in May. The venues they're playing are some way off Wembley - their appearance at The High Rocks, Tunbridge Wells, represents something of a departure for a venue best-known for its Wednesday afternoon tea dance ("ballroom dancing with Peter Harvey, tea and cake, £6"). Nevertheless, it's clearly a step up for Rick Buckler, who last year was to be found drumming in a Jam tribute act called The Gift (from whence Russell Hastings has also sprung): "you could say that Paul Weller is a tribute band because he plays The Jam's songs live," he suggested at the time.

That seems a bit of a hopeful argument, but perhaps the kind of high-minded principles that Weller espouses are a luxury that a multi-millionaire rock star can afford, but his less successful former cohorts can't.You could argue that - ahem - this is the modern world, and that The Jam touring without Paul Weller fits with the current vogue for musical nostalgia, in which trifling matters like the absence or death of a key member aren't allowed to get in the way of making some cash or, apparently, audience enjoyment: after all, plenty of people are willing to go and see Queen live without Freddie Mercury, so why not The Jam without Weller.

Then again, twenty-five years ago, anyone who publicly suggested that The Jam had anything in common with Queen would have swiftly been kicked to the floor by several pairs of bowling shoes. After all, die hard fans will tell you that what made The Jam special was the fact that were about more than just the music. They were about fashion and politics and, yup, our old friend principles which, with the best will in the world, isn't something that anyone's going to claim of Queen.

With all due respect to Mr. Petridis, I'll happily suggest the Jam and Queen have all sorts of things in common.  Vox amplifiers for one, the crazed nostalgia addiction of their fans for another.

The Ponys @ The Barfly, Camden

What nobody told me is how loud they are live. Seriously, they are fucking loud. And I spend most of my time at noise shows.

The Ponys took the stage a little late but promised to 'keep making noise til they pull the plug on us', which was still nowhere near long enough for me. Concentrating mostly on material from 'Turn The Lights Out', songs collided into each other, a blur of feedback, furious riffing, and psychedelic bizness that I don't know the correct term for. And then in the middle of all that, they drop in a jaunty keyboard tune, and before you've even finished scratching your head, they're back to the hard stuff, pummeling you with all sorts of garage-rock goodness. I was beaming from burst eardrum to burst eardrum.

(NOTE : We've taken down the MP3 of "Open Your Heart" and now opted for a quicktime stream of the song at the request of Lavender Diamond's UK label, Rough Trade.  We apologize for any inconvenience...and we're looking forward to charging you real money for the physical goods!)

Cat Power at the Brits

This was the scene on Wednesday night at the glittering Brit Awards, the UK's equivalent of the Grammys. Cat Power was given the accolade of being nominated as Best International Female and both Chan Marshall and co-emperor of Matador Records Chris Lombardi are seen taking it all in. Held at Earls Court (surely the worlds biggest hanger?) home to the Ideal Home Show and various superstar triumphs and disasters over the years, thousands of media industry types and even more pop loving civilians witnessed a roll call of the great and the good (it says here). OK it wasn't the "carnival of mayhem" Russell Brand promised us and we all secretly wished for but there was enough going on to keep us amused and appalled all night. Compere Mr Brand's opening salvo at David Cameron raised him a notch or two to my mind and although he managed the usual percentage of own goal jokes ("Queens vagina" anyone ? I mean anyone?) he carried off the night with ease.Unfortunately Cat Power didn't walk away with the award she so justly deserved but since when has true and authentic quality, style and genuine talent won out against production teams, song doctors and corporate back scratching at such events. (OK a couple of times). But we weren't the only ones that wuz robbed Justin Timberlake over Bob Dylan, don't get me started.
Rumours of strange fluctuations in the telephone voting I am sure are just that. Of course Orson deserved that award - fair and square. And to my mind their acceptance speech was one of the low highlights of the evening that makes the Brits such a memorable entertainment in the pop firmament.

The Arctic Monkeys didn't accept their awards in person but their filmed acceptance speeches first dressed as characters from the Wizard of Oz (great cowardly lion by the way) and then as the Village People really did show their humorous side.

I also learnt that British people LOVE Take That. I mean everybody or at least 99% of them and the other 1% are probably in comas. They have obviously transcended every hurdle to become the sort of icon that is unimpeachable (at least until the next tabloid revelation - build em up and shoot them down).

And we finished up with only one staff member missing in action the next day. 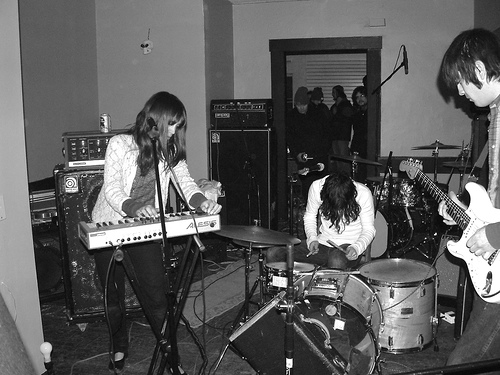 all dates with Clockcleaner, shows in Kansas City, Oklahoma City and Louisville, TBA.

Though Chris Lombardi has been flooding in-boxes worldwide with the clip below, it took the analytical chops of Early Man's Mike Conte to really capture the essence.

Admittedly I don't really know the dude from a hole in the ground, but: If Doug Aitken had any balls whatsoever he'd take down those Konica/Minolta commercials he made for MOMA (I'm standing in the freezing cold with Richard Hell's daughter and 7 kids from Bard for THIS SHIT? Thank god Prime Burger is up the street) and project a real piece of art like this here. Step it up a notch, guy. You only live once.

Ponys in the UK

Yay folks, we're as excited as some excitable people - The Ponys are doing three shows in London. This marks the first time I'll have ever seen them live, which by all accounts is quite the experience.

You can get tickets here.

I have a feeling this is going to be one of those 'Oh, The Ponys? Yeah, I saw them in 07 supporting Troubles at Sonic Cathedral. I was there' -type deals, so get your skates on.

How Soon 'Til The Debut Of Mofungo Jeans? 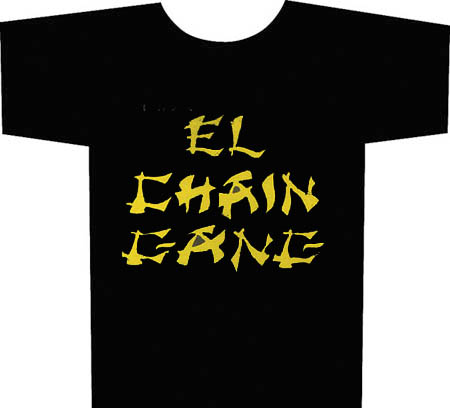 I do hope this isn't a hoax (much as I wish the City Of Boston would actually learn how to define "hoax").

We Must Admit...Tony Victory Has Never Looked Or Sounded Better

Everyone around me hates my horrible, impulsive renditions of "Pace or the Patience"

When I use the term "post-punk", you know what I mean, and I therefore apologize for being too lazy to come up with a more accurate tag, but maybe one simply does not exist....for all the right reasons. The easy-on-the-peepers Love of Diagrams have opened their EP with a song that's like having sex on a camping trip: Fucking In Tents!! That one only works verbally....at an odd hour. Drunk. They pulled the old Bob Welch "Ebony Eyes" trick on this one: Seven or eight big hooks in one song that could have easily been utilized to make seven or eight good songs. Why did I mention the usage of the neutered genre classification of post-punk? Because I have listened to this song the exact number of times that I've listened to my other favorite first-wave example, Nightingales' "Idiot Strength." And by "exact number", I mean 782 times within the past two weeks. And though residing on what feels like the other side of the Earth from Athens, GA, I must, as a Southerner, give it up for the Pylon cover.

A Great Day In The Annals Of Guerilla Marketing

To the elected officials of Boston and Massachusetts who are knocking themselves out with their crazed grandstanding, I can only hope that none of you are ever placed in Frylock's Cloner.

(UPDATE :  A nice way to cash in on the lunacy, though I would hope some of the dough could go towards the defense fund of the poor schnook the Boston Police have made a scapegoat out of. )